There are a few (or maybe many) mountain bike parks in NZ. Rotorua, a town ~90kms from Taupo, has one such park. Apparently it's famous since it's so large. 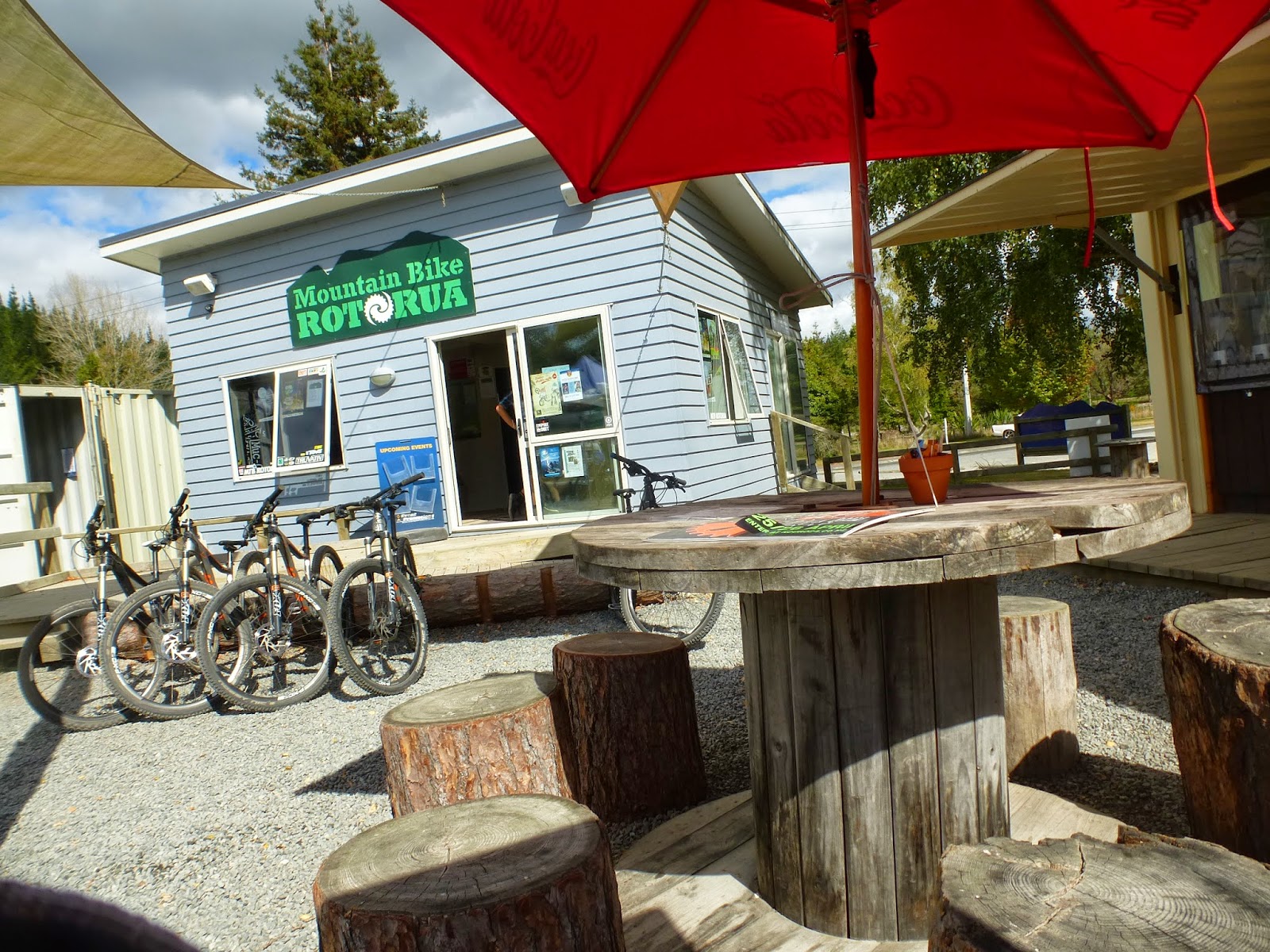 There's a little shack for info, another for coffee, sandwiches and smoothies, and another full of tools and a bike mechanic. I have a feeling this place is packed when it's tourist season.

Our planned ride included some of the trails in the park and then on to trails outside of the park. Groomed trails just don't have the allure of the wild ones. However, we've seen video of people riding these trails, and it's pretty obvious they are very fun to ride.

We got an early start today, but we had some stops to make in town and add that to the driving, it took us until a bit after 1pm to start riding so we decided to skip the mountain bike park and just get on the road. 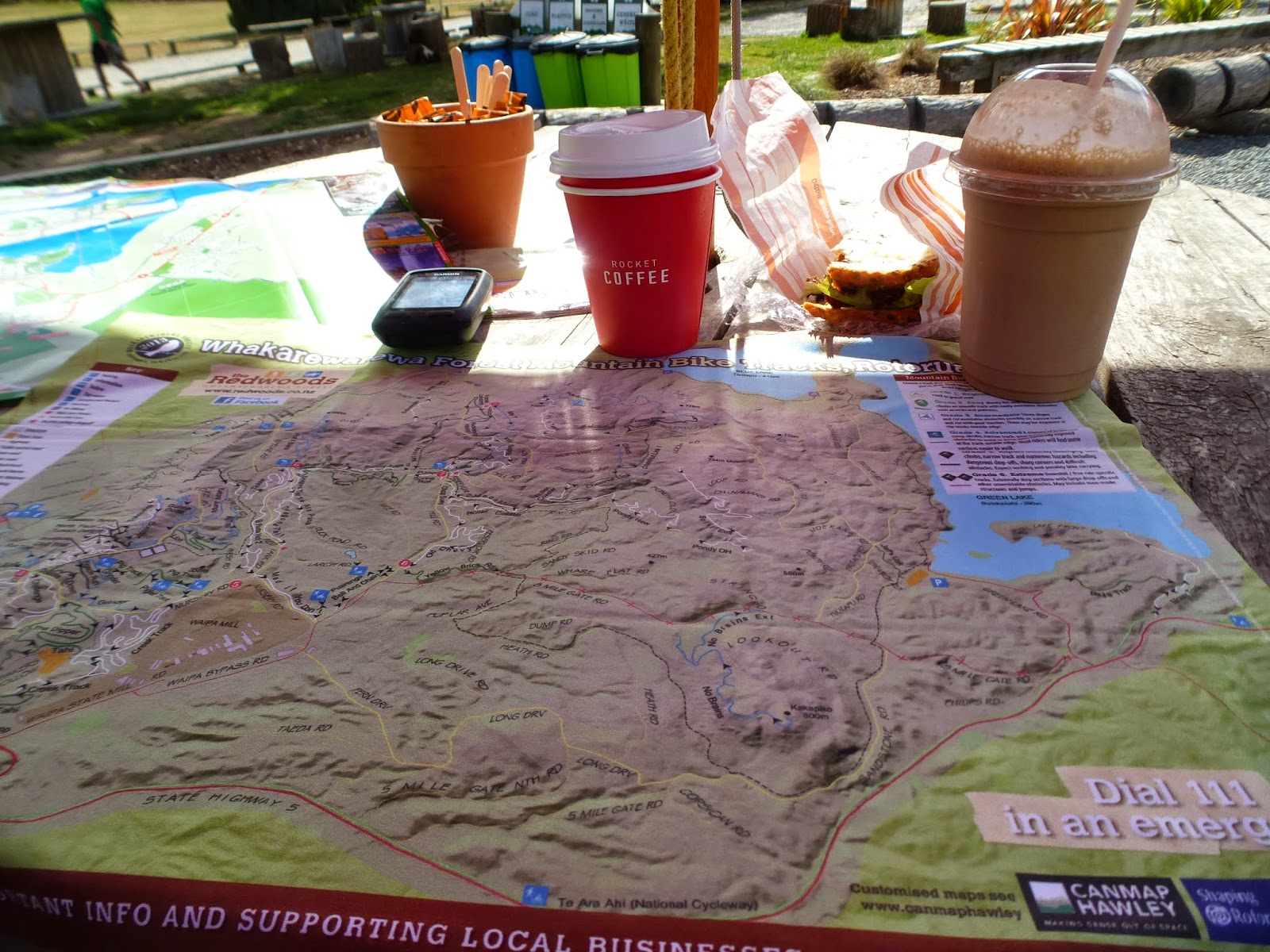 The trail map of the mountain bike park is printed in detail on cloth. More people ought to print maps for active people on cloth (ahem, I'm talking to you every cycling map company...maps printed on paper don't last more than a single bike ride...) 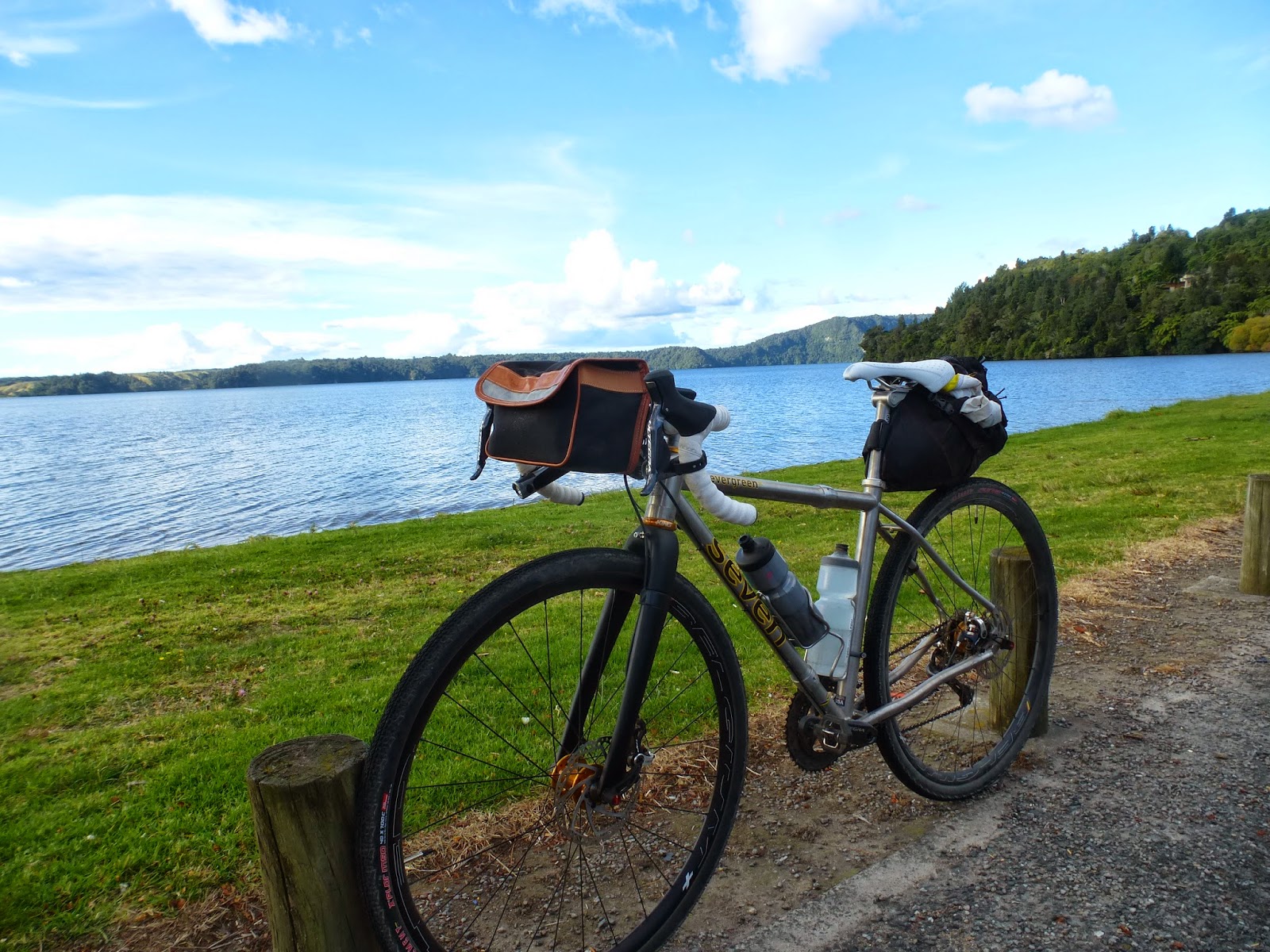 The first part of the ride was all on pavement, smooth, fast pavement. Our Evergreens ride fast on the road (even with loaded bags and a lot of water, 11 lbs carried by Rob alone) so we have fun on the road and fun on the trails, both. These are very special bikes. I'll write more about my bike after the trip, but for now, I'll just say that I'm completely astounded at how great it is in every single way...and I don't know how I've lived without it before now, it's making this trip so much more complete than it otherwise would have been.

The weather was quite pleasant all day, except for about 5 minutes when there was a torrential downpour. Rain wasn't in the forecast so our rain jackets weren't at the ready...except we happened to be next to a tourist spot named Hell's Gate (it's an area full of thermal activity and mud bath place). We were able to avoid getting wet almost completely thanks to a generous awning next to their gift shop. Considering how often we've been near anything that would give us shelter this whole trip, we got very lucky. 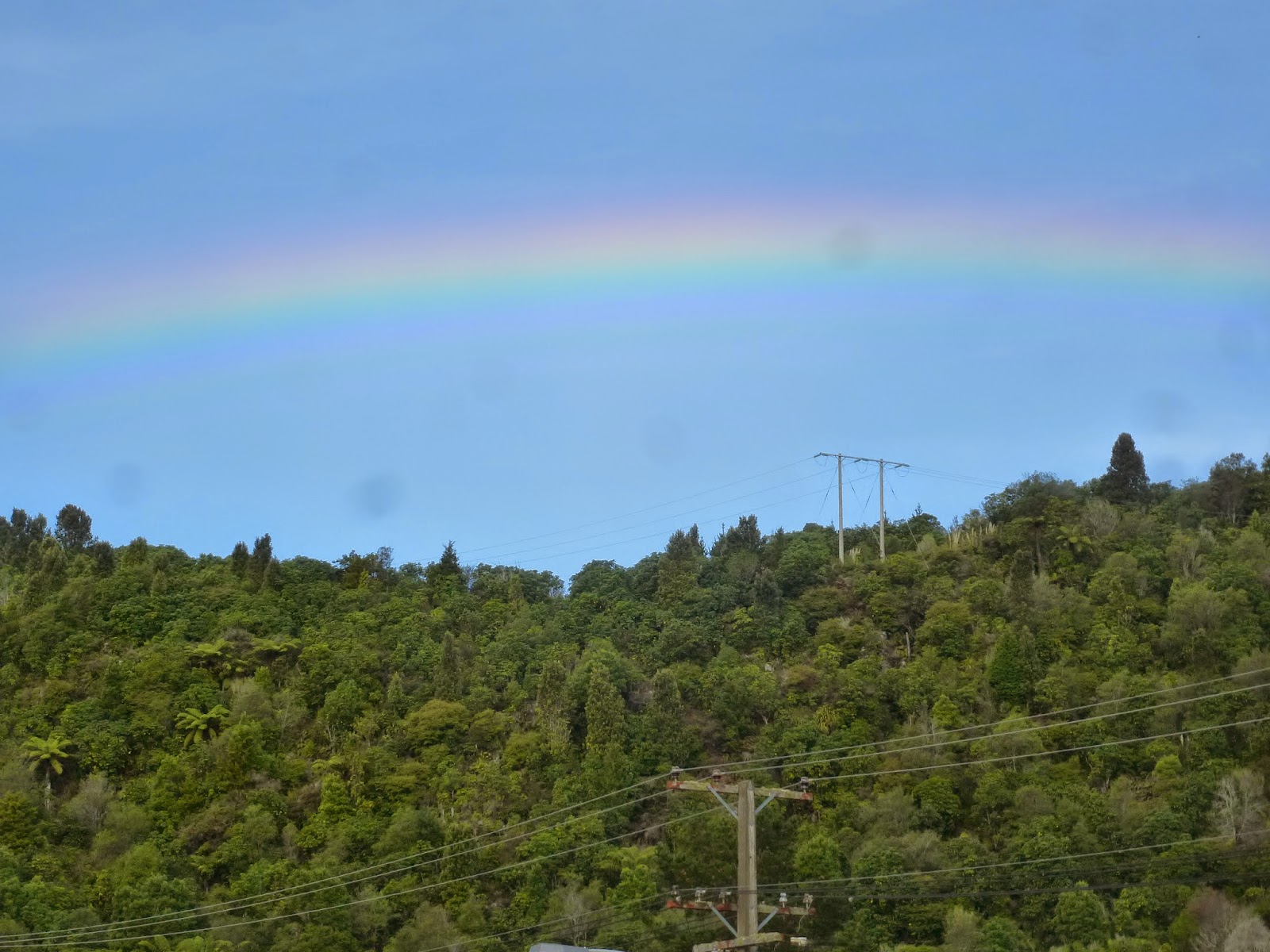 Post rain there was a beautiful rainbow and blue skies. 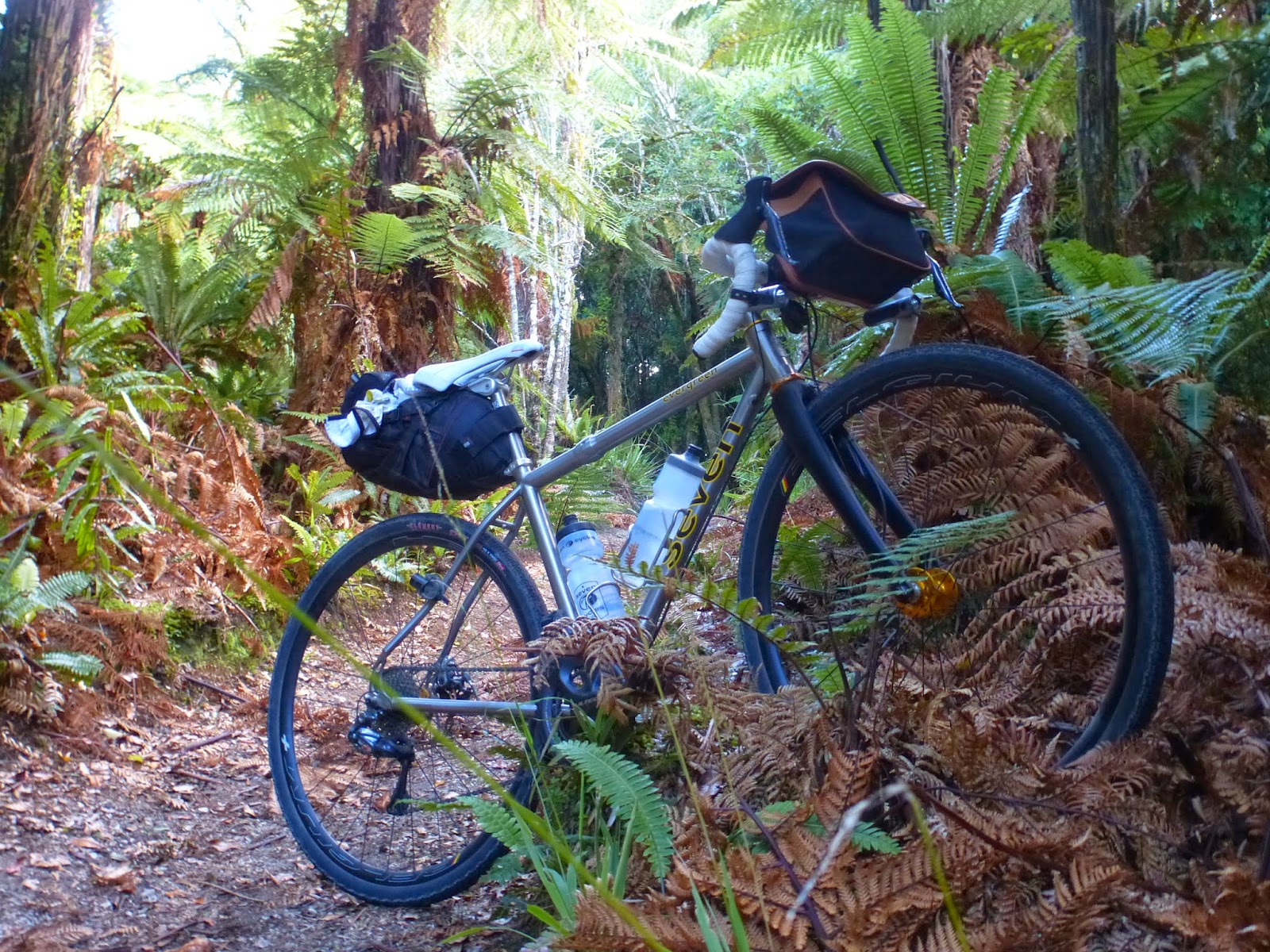 Not long after, we turned onto a road that took us into rain-forest like areas. We were still on pavement for awhile in this wild-looking place. Then we got off the road, onto a grassy trail that turned into a mountain bike trail (it used to be just for hikers, then they opened it up to mtn bikers...how often does that ever happen?)

The whole off-road ride was in an area that I felt I'd never seen before except in tropical rain forest exhibits in zoos. Think Jurassic Park wild. It was that scenery without the dinosaurs. We saw some really cute little birds and I did everything I could to take photos, but they were too quick. One little blue and white bird seemed to be playful. The chirps are really cute. I'm so glad I don't have to keep looking out for wild creatures or snakes or anything like that, it would change the experience so much. This just feels like a world away from the real world.

A good portion of the ride involved hike-a-bike sections. In one 1.8 mile section alone, we gained 1,110 feet of elevation. It was exhausting and hard work to say the least. We'd heard that the downhill portion on the other side would make it all worthwhile. The downhill section was very fun and more technical than we've seen so far, but it'd be hard to say all of the hiking paid off. For me, the downhill parts were especially rewarding, since it felt like I rode sections I wouldn't have felt comfortable riding in the past. Chalk it up to laziness, riding is far easier than getting off the bike than walking it in the tricky parts.

We have a lot of video from yesterday, will post small portions of the footage when possible. 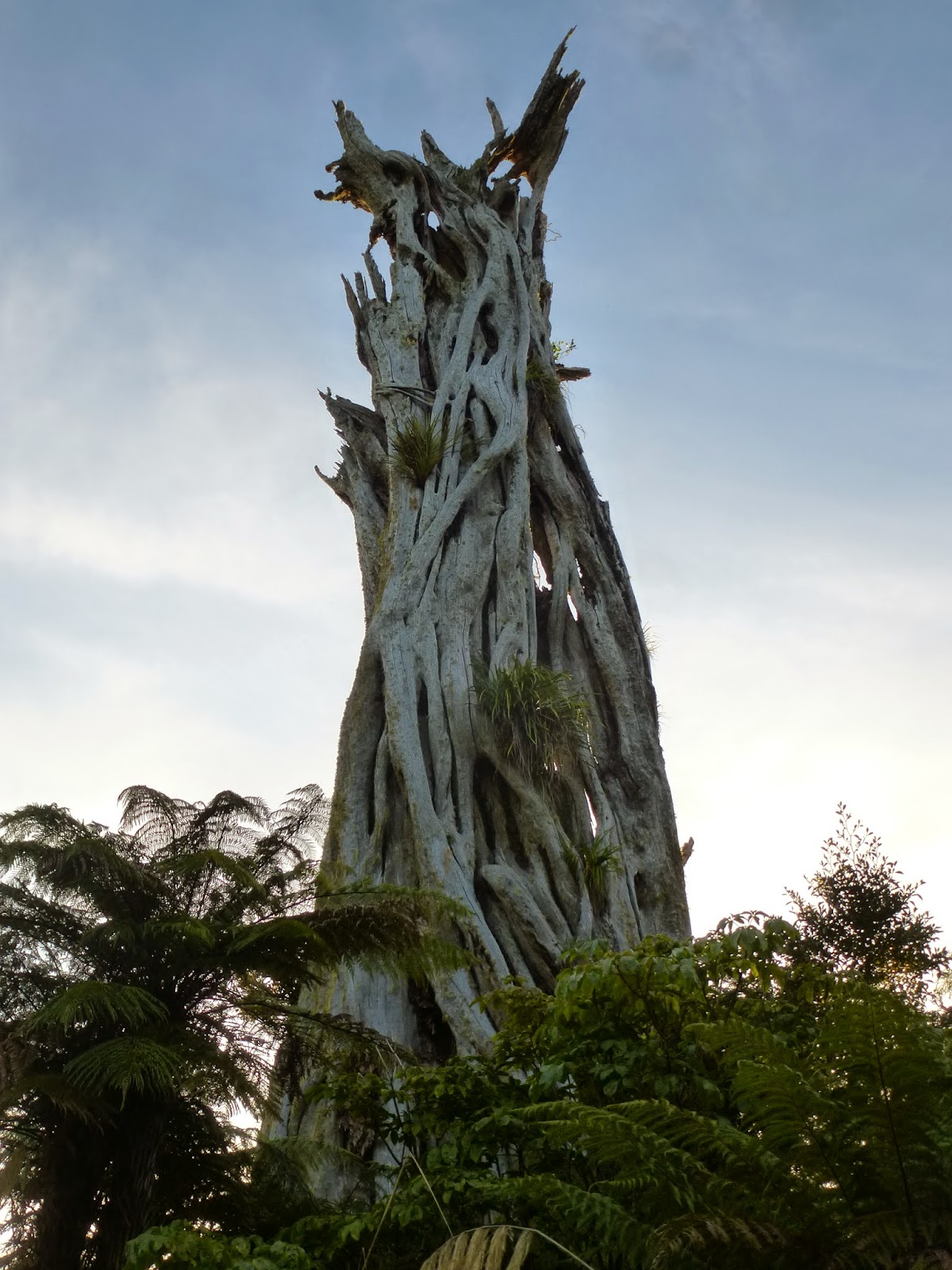 This petrified tree was at the top of the climb. I can only imagine what ancient rituals might have taken place here. Just before complete darkness takes over, the horizon is outlined next to the clear sky. Impossible to show, the stars that shine at night are remarkable. The sky is so full of brilliant stars. This is a place without light pollution or any pollution, for that matter. The stink from the sulfur of the thermal areas is as bad as it gets. People seem to be very conscious about keeping their beautiful land clean in all ways.

We finished the 43.6-mile ride at 8:30pm. It felt like we'd gone much further than that as we were perfectly exhausted after being out there for 6 1/2 hours. The max temp: 84 degrees, average: 66. It felt like it stayed just as hot (and a bit humid) after the sun went down.