Morning in Taupo was calm and serene, as it is every morning. Rain was falling gently from the sky. We made the ride plan based on the weather forecast (the one in the newspaper is about as good as it gets...so it's hard to tell what's what), to avoid as much of the rain as possible. We've learned that riding in the rain isn't terrible since it's warm, but it's never any fun to get stuck in a downpour, no matter the temps.

Rob created the most comprehensive ride plan for this trip...he "scouted" more routes than we have time to do and multiple riding distances for each route. Having so many options has given us great flexibility and confidence in starting out each day. What he did borders on impossible. I feel like I'm traveling with a native Kiwi considering how well he knows the roads. 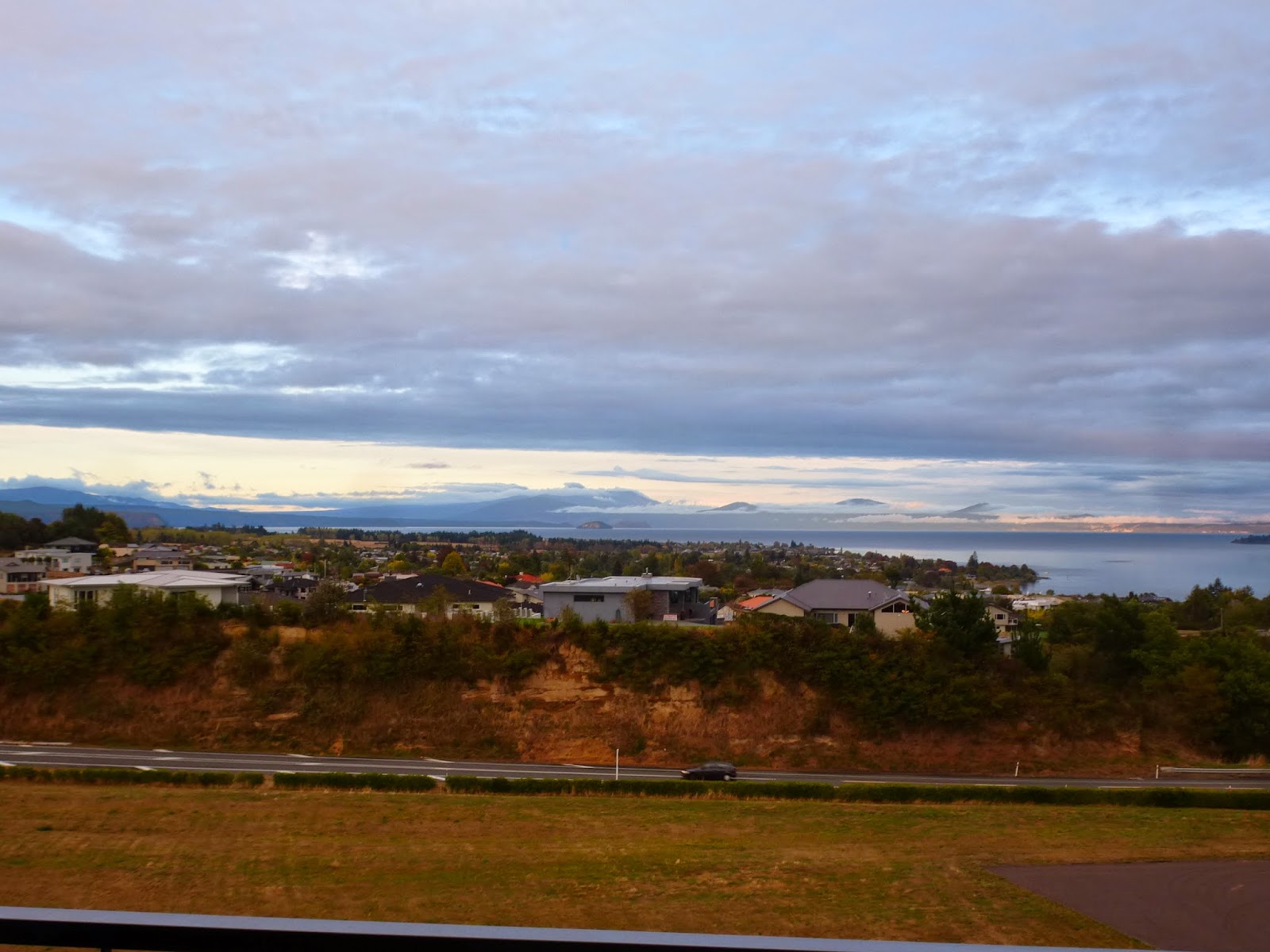 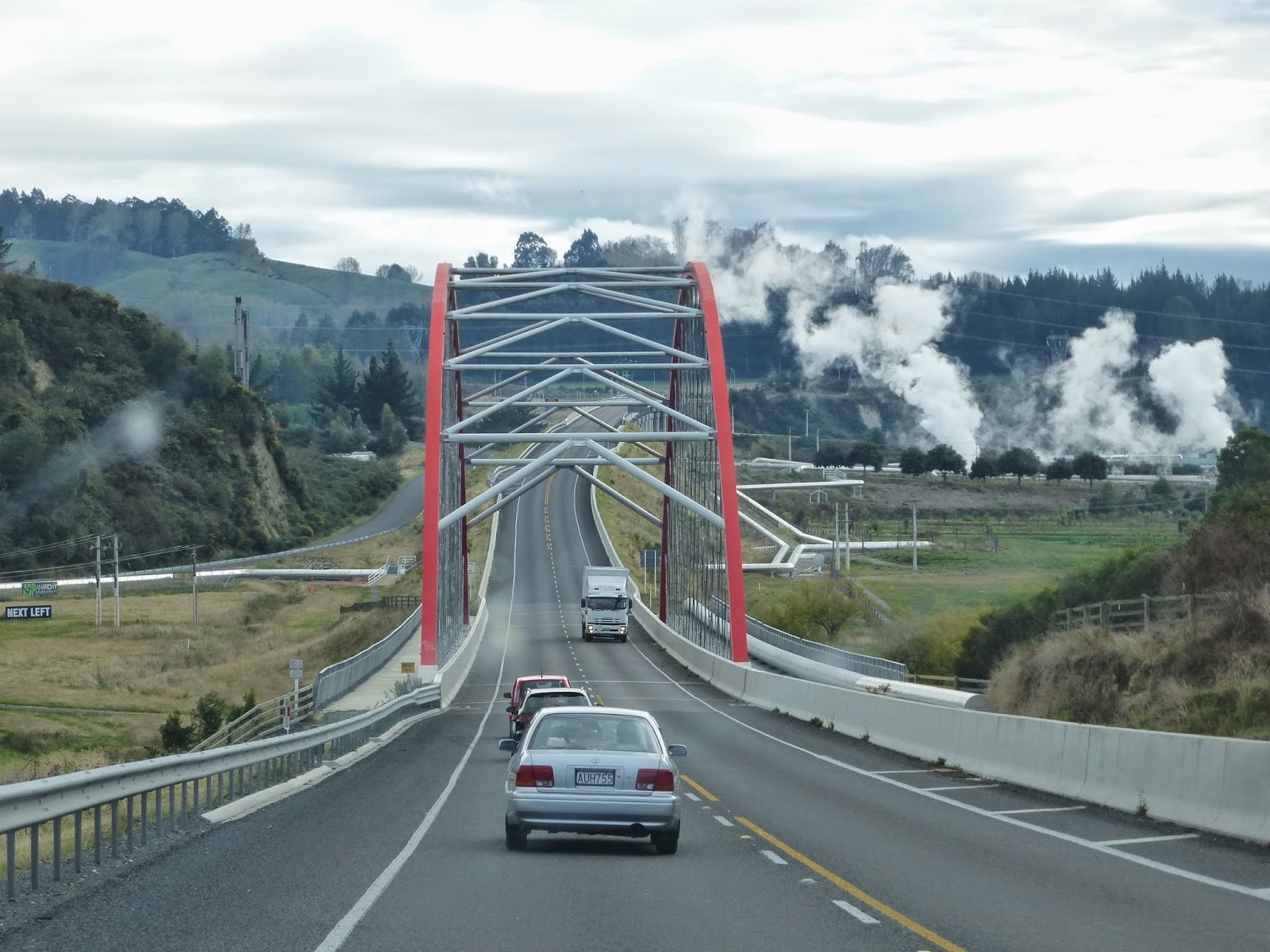 We chose to drive 3 hours to ride in the Bay of Plenty.  Lovely drive. And when I say "we" I mean Rob is driving, I'm enjoying the scenery and backseat driving. Driving on the other side of the road is not an easy task. 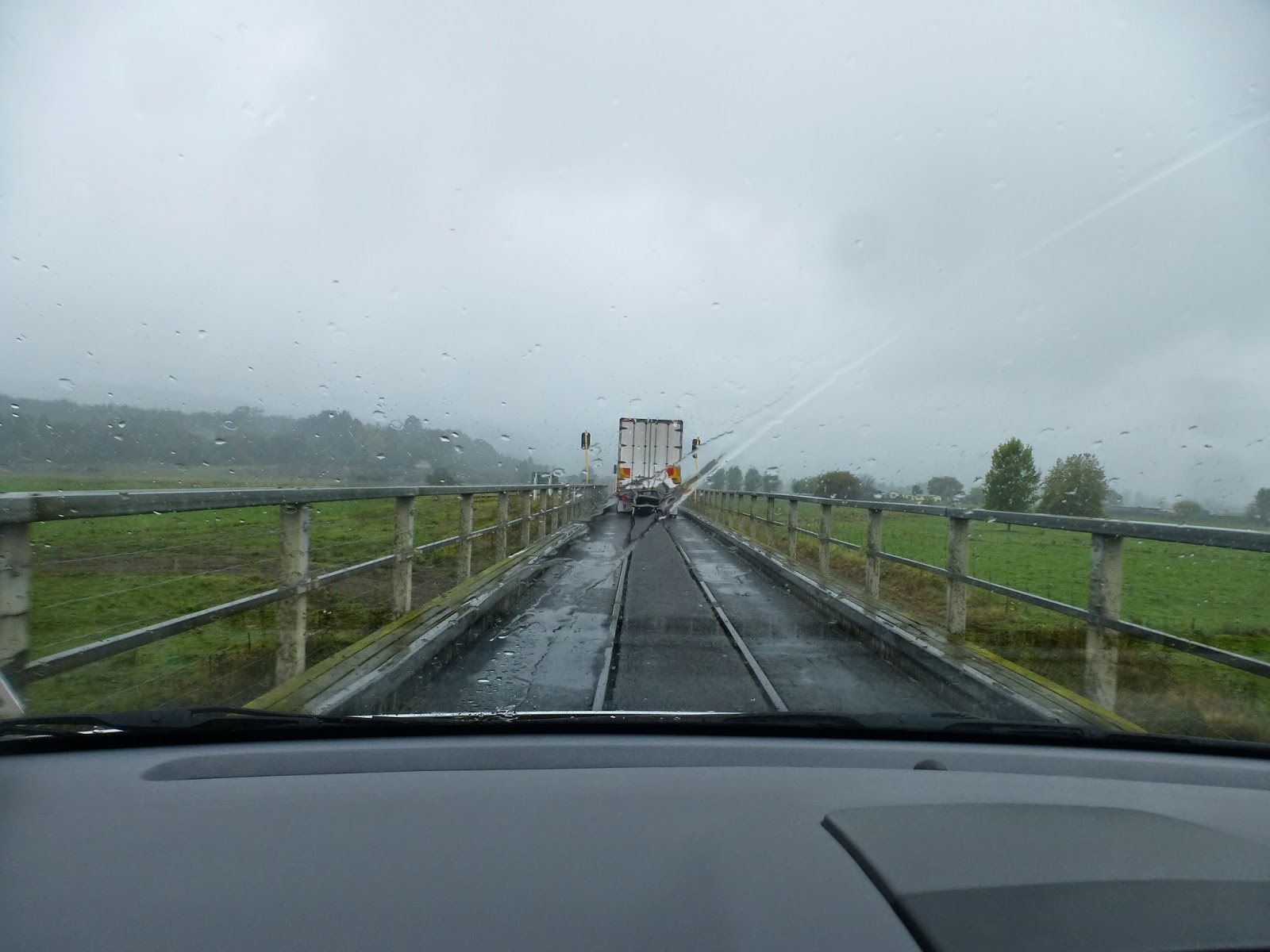 We drove through torrential rain that wasn't far from our final destination. We kept telling ourselves the sun would be right around the corner. 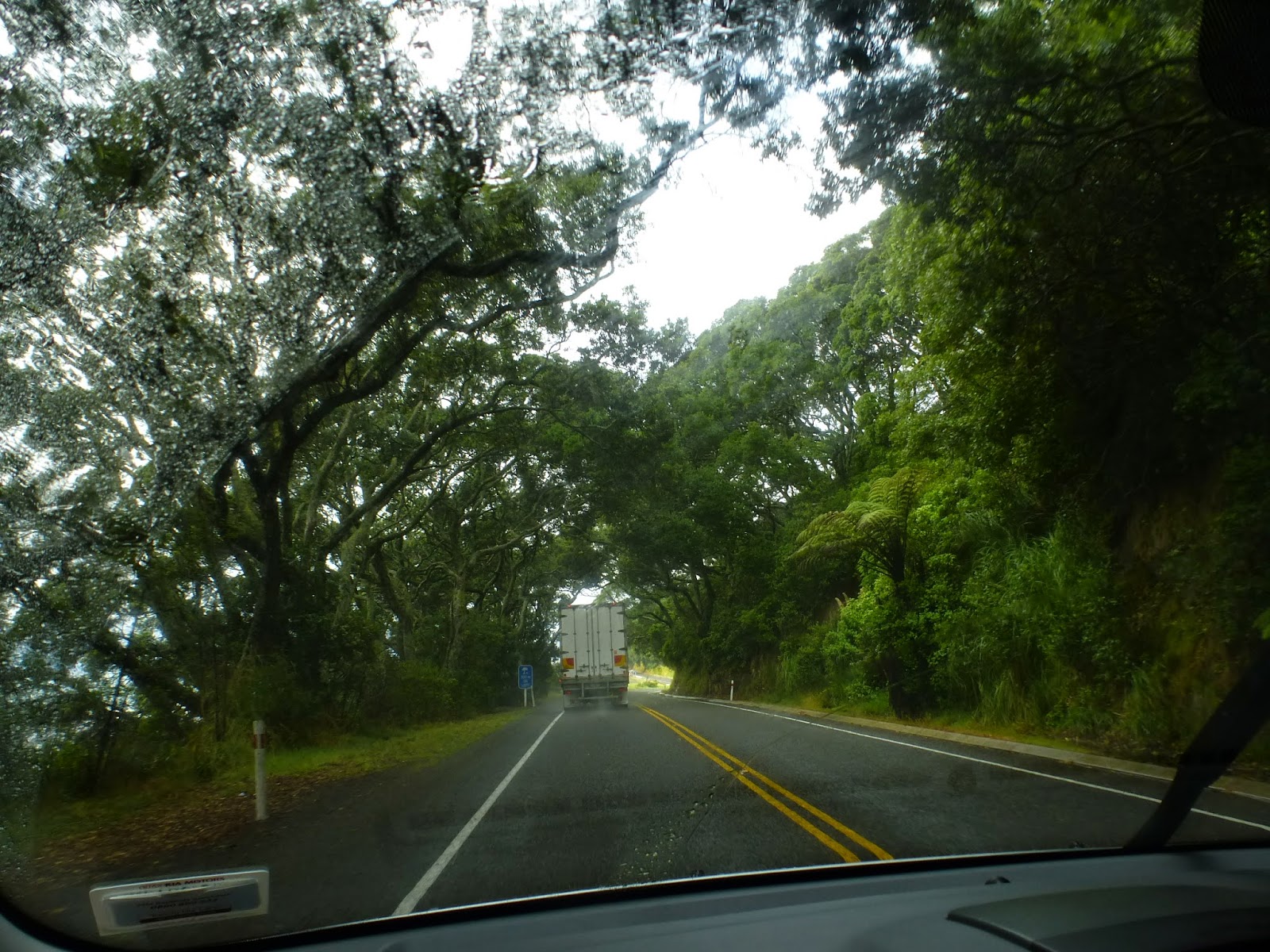 Turns out, we were mostly right as the rain turned into a very slight drizzle and stopped altogether for much of the ride. 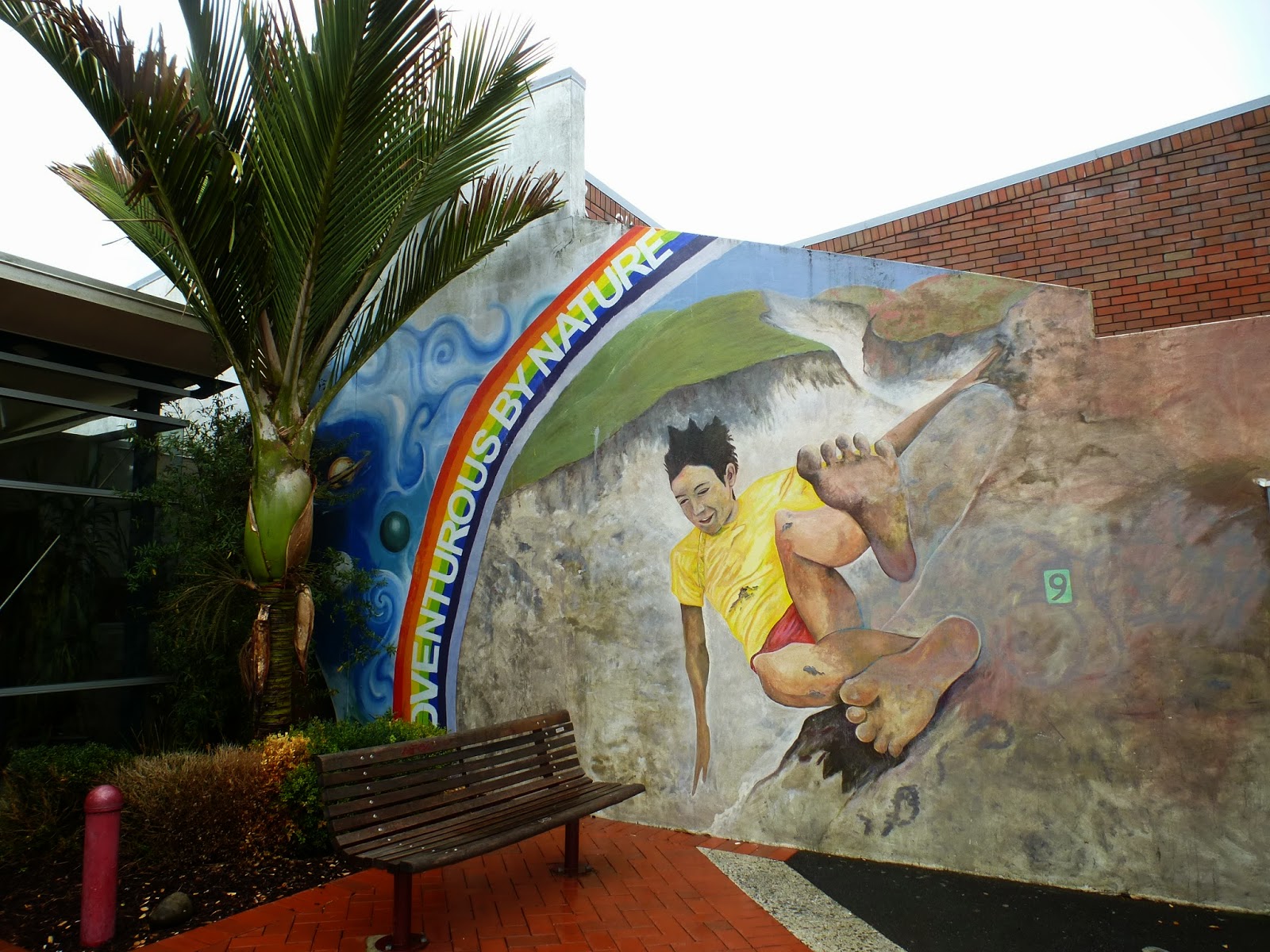 New Zealanders and most people who visit here are adrenaline junkies. We have to remember this when taking the advice from Kiwis. 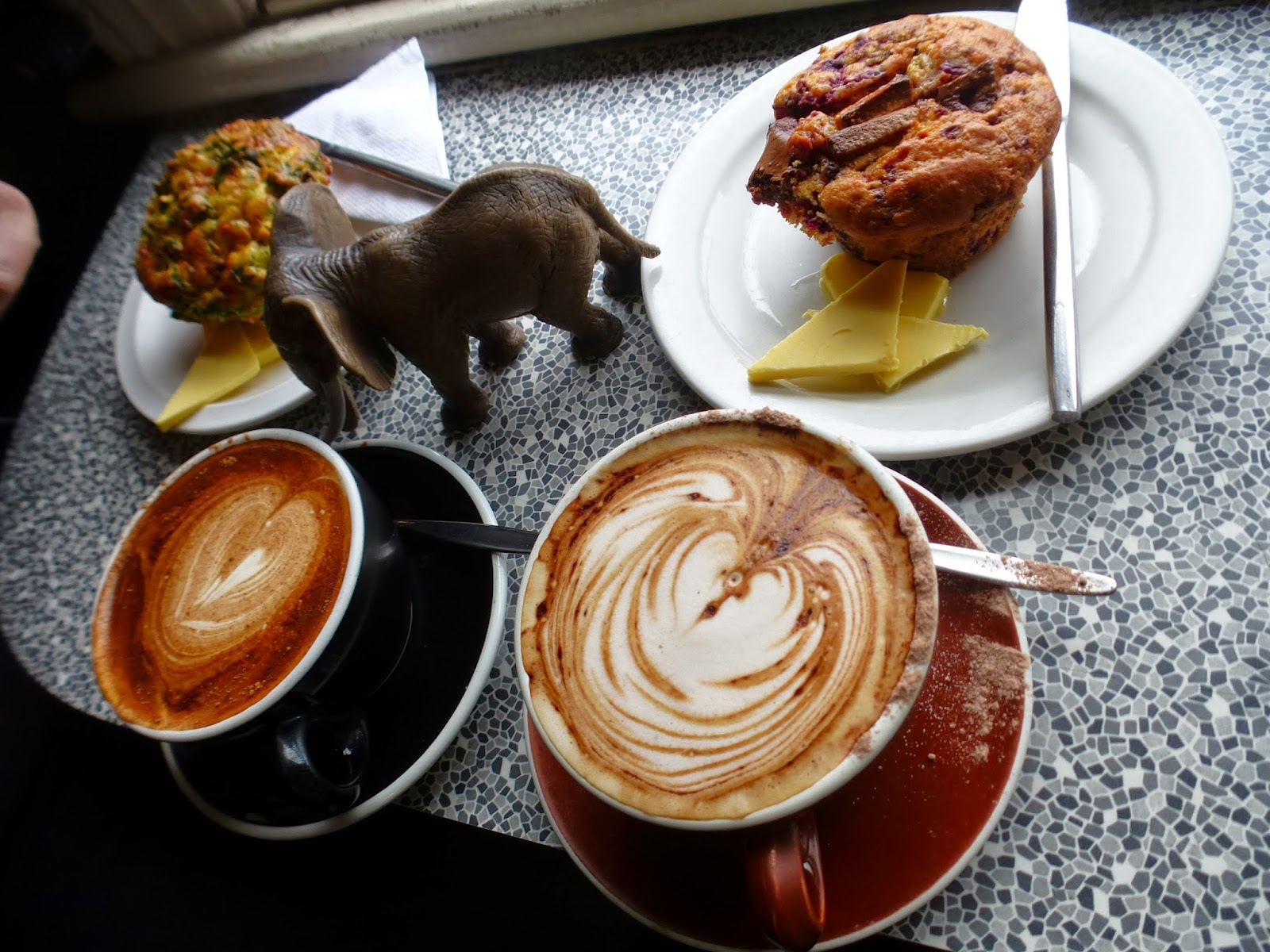 Lunch was comprised of muffins and a mocha & cappuccino the size of an elephant at a cool little joint in town. Most places to eat in little towns like this one look too fast-foodish and kind of run down. None of the towns look dirty or anything, just not particularly up-to-date in architecture or interior decoration. A couple we saw yesterday had the feeling of trying to be a town out of the Old West, cowboy style. 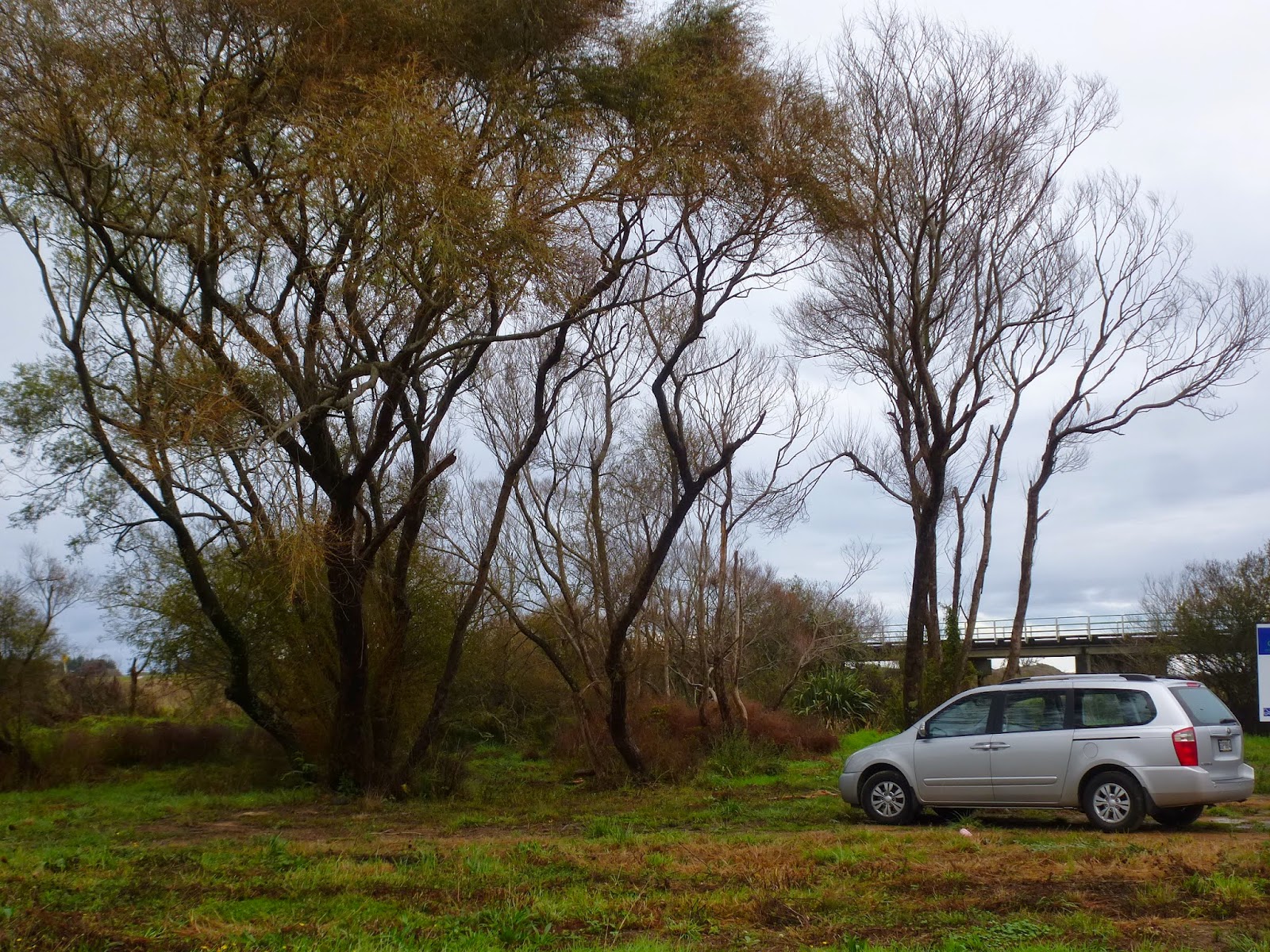 Start of the ride: random place in the middle of nowhere. I'm becoming a big fan of the minivan. Tossing the bikes in without taking off wheels is such a luxury. My folks told me someday I'd understand why they liked their minivan so much...well, now I *finally* really get it. 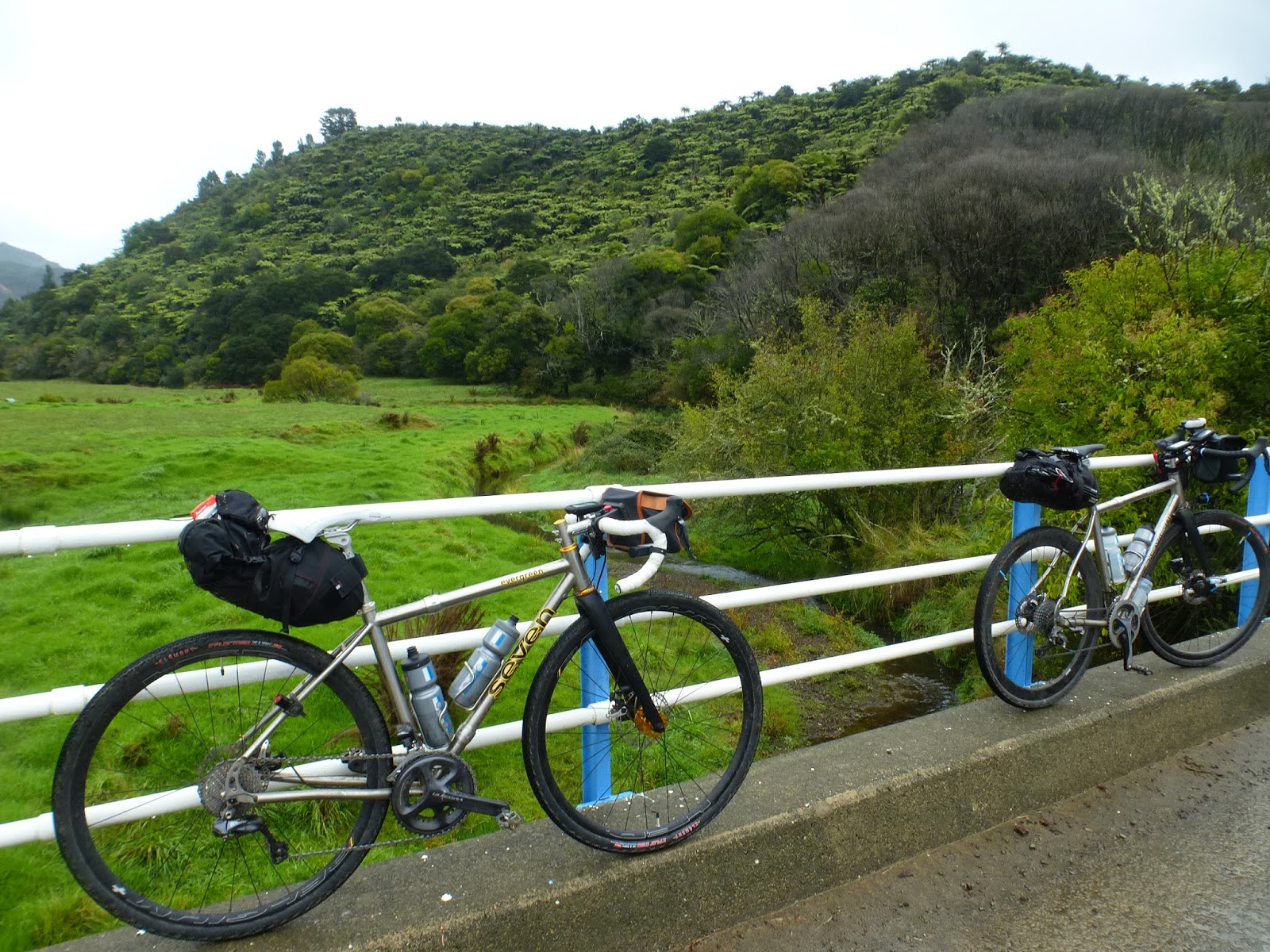 The area is lush and the most beautiful yet of the trip...and the other areas we've seen have been nothing less than breathtaking. So, what's the right adjective: astounding? Around every corner was a breath-taking view. By that, I mean, it actually often took my breath away. Since there was a lot of climbing going in, it's true, that I was already working hard and out of breath. 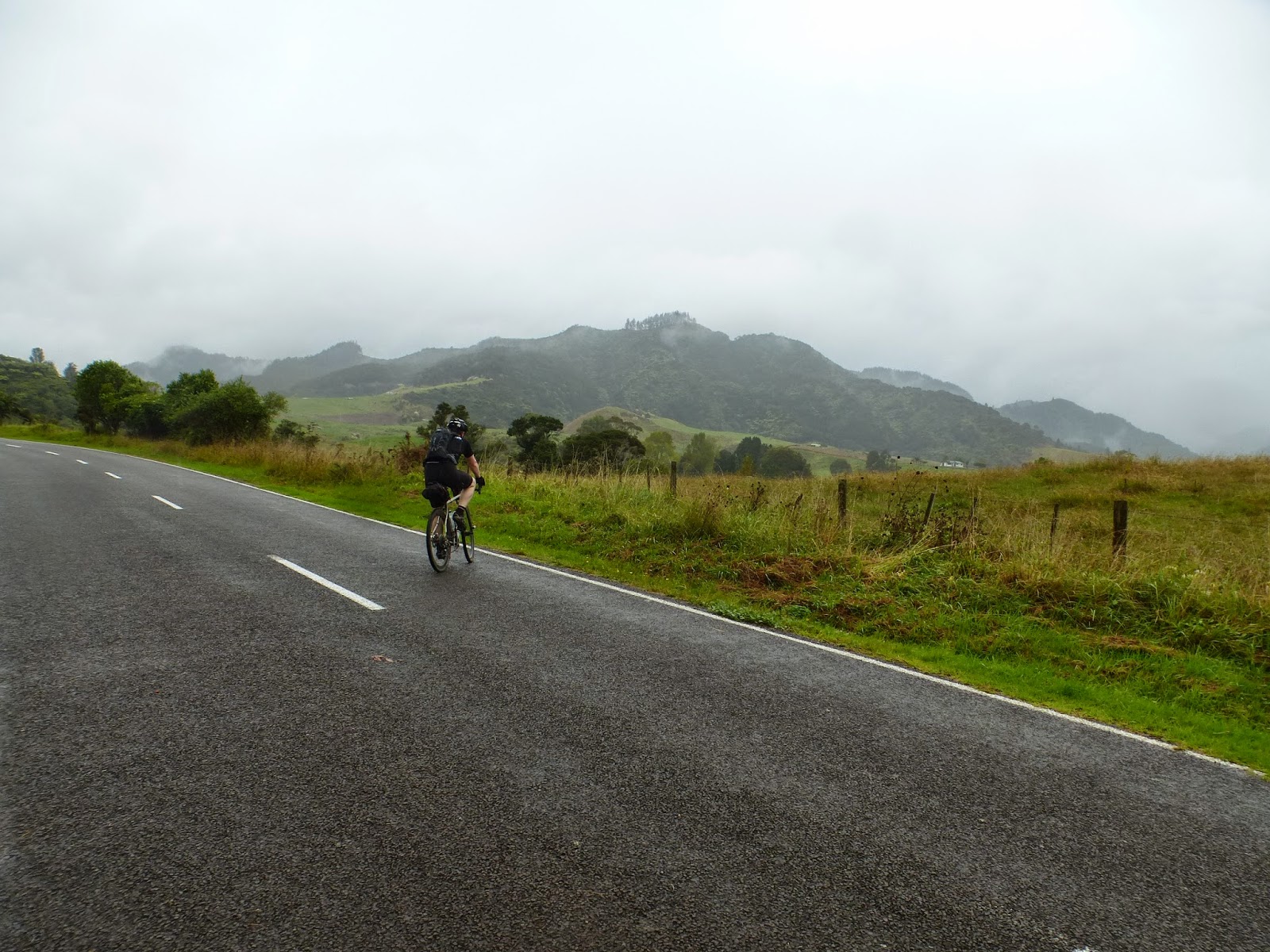 Having the low rain clouds made the greens greener and the fluff of the fog added so much to the scene, too. 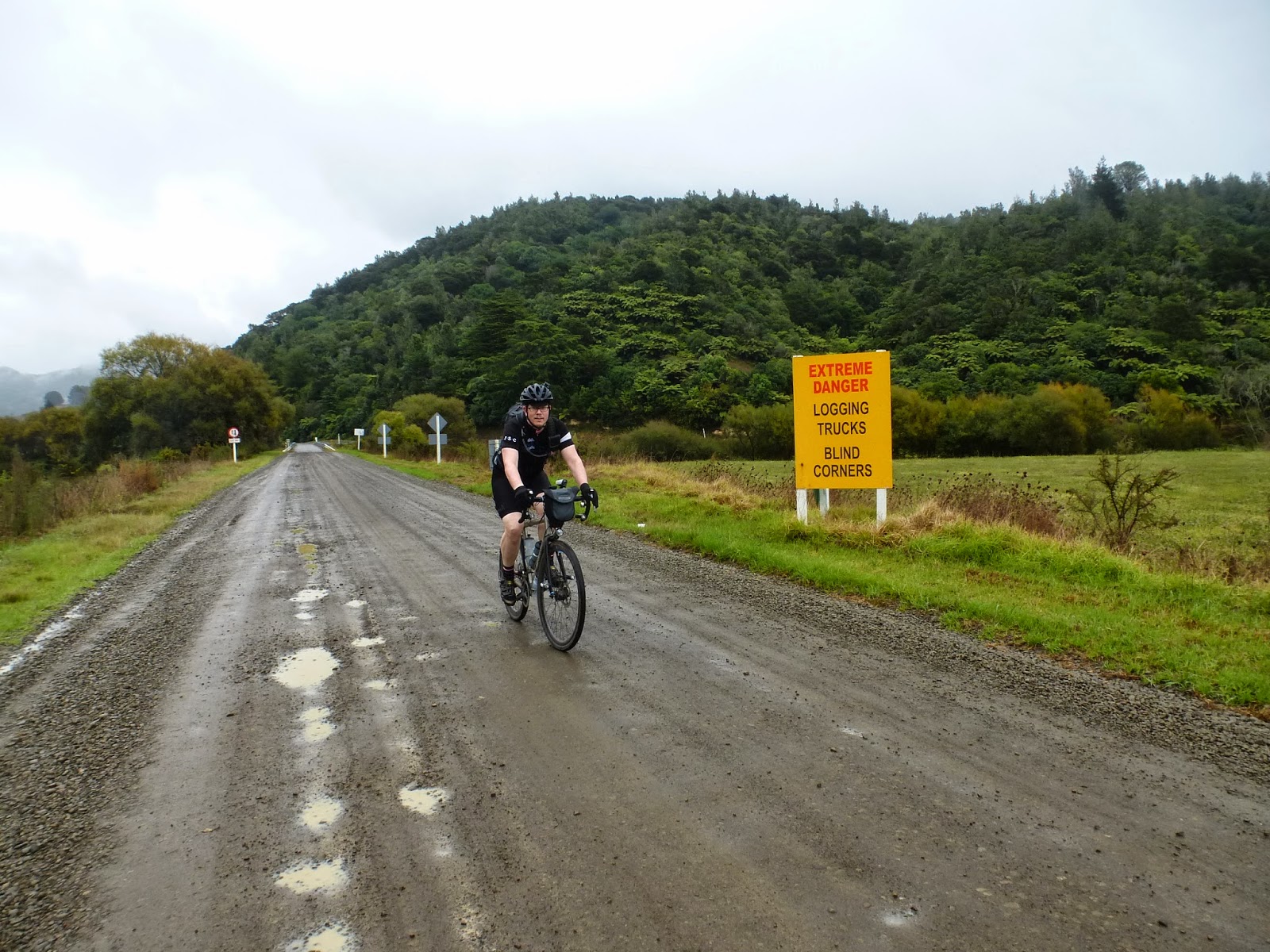 Contrary to the sign, we saw a grand total of (maybe) 5 cars all day. We had this slice of paradise to ourselves. 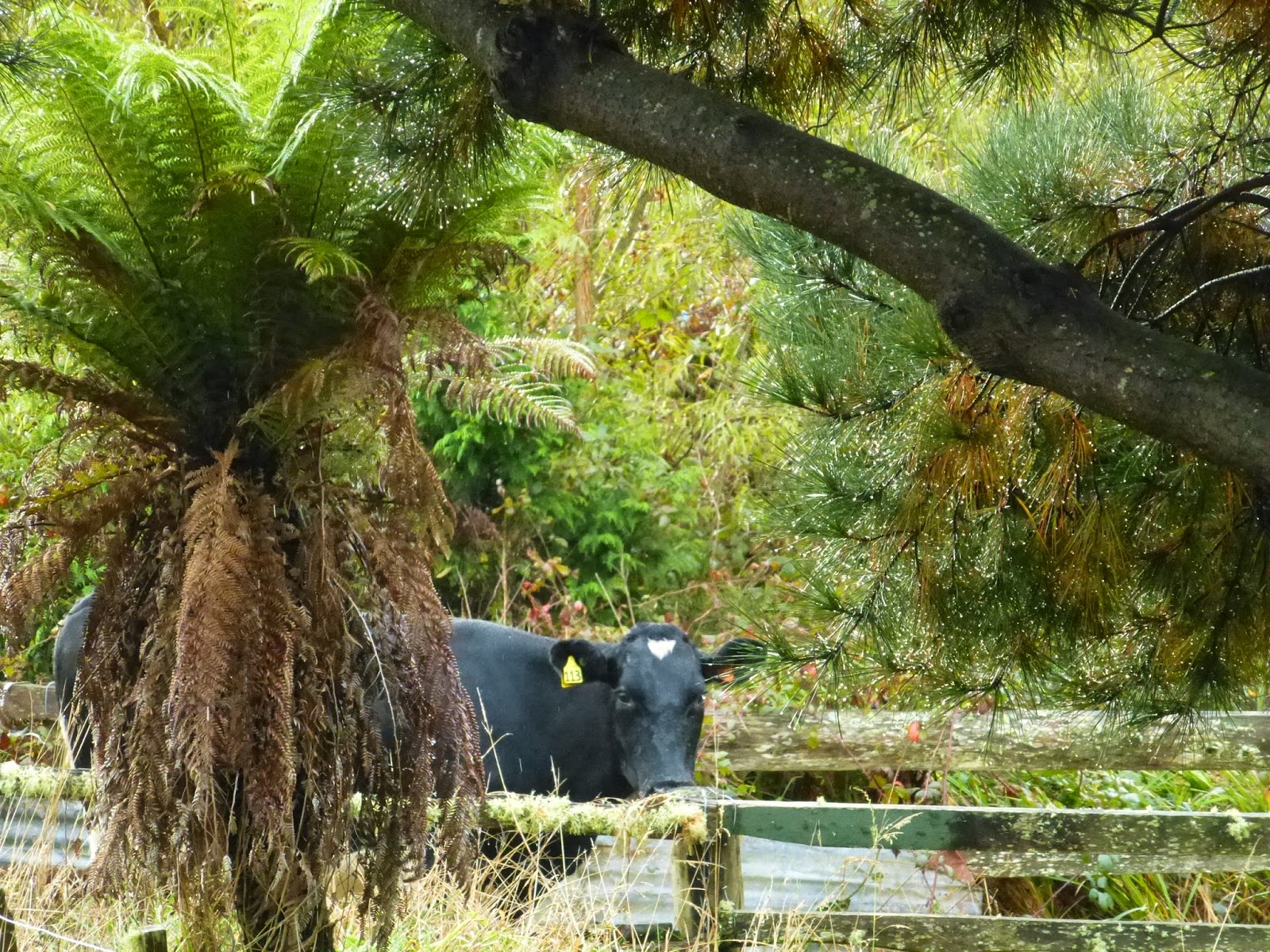 ...actually, we shared the place with a fair number of cows. I spent some time conversing with this cow. We have the video of the conversation. He was quite chatty. 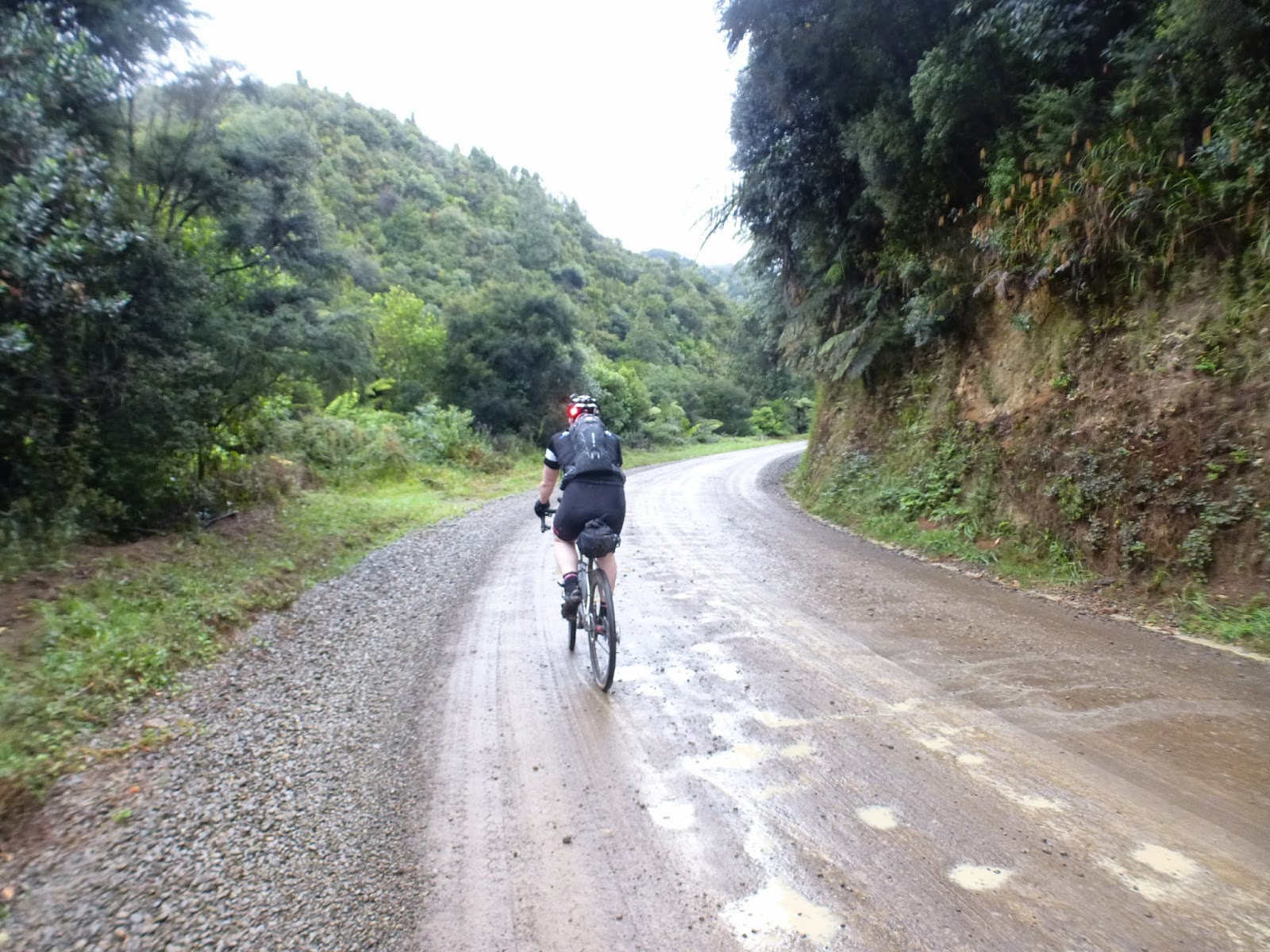 The dirt road, according to the guide book, is one of the roughest in New Zealand. That's saying a lot about the roads here since it was in very good condition with only a few rough spots. The dirt was well packed. The trickiest riding I've found is when the loose gravel is deep, that's pretty hard for me to ride. 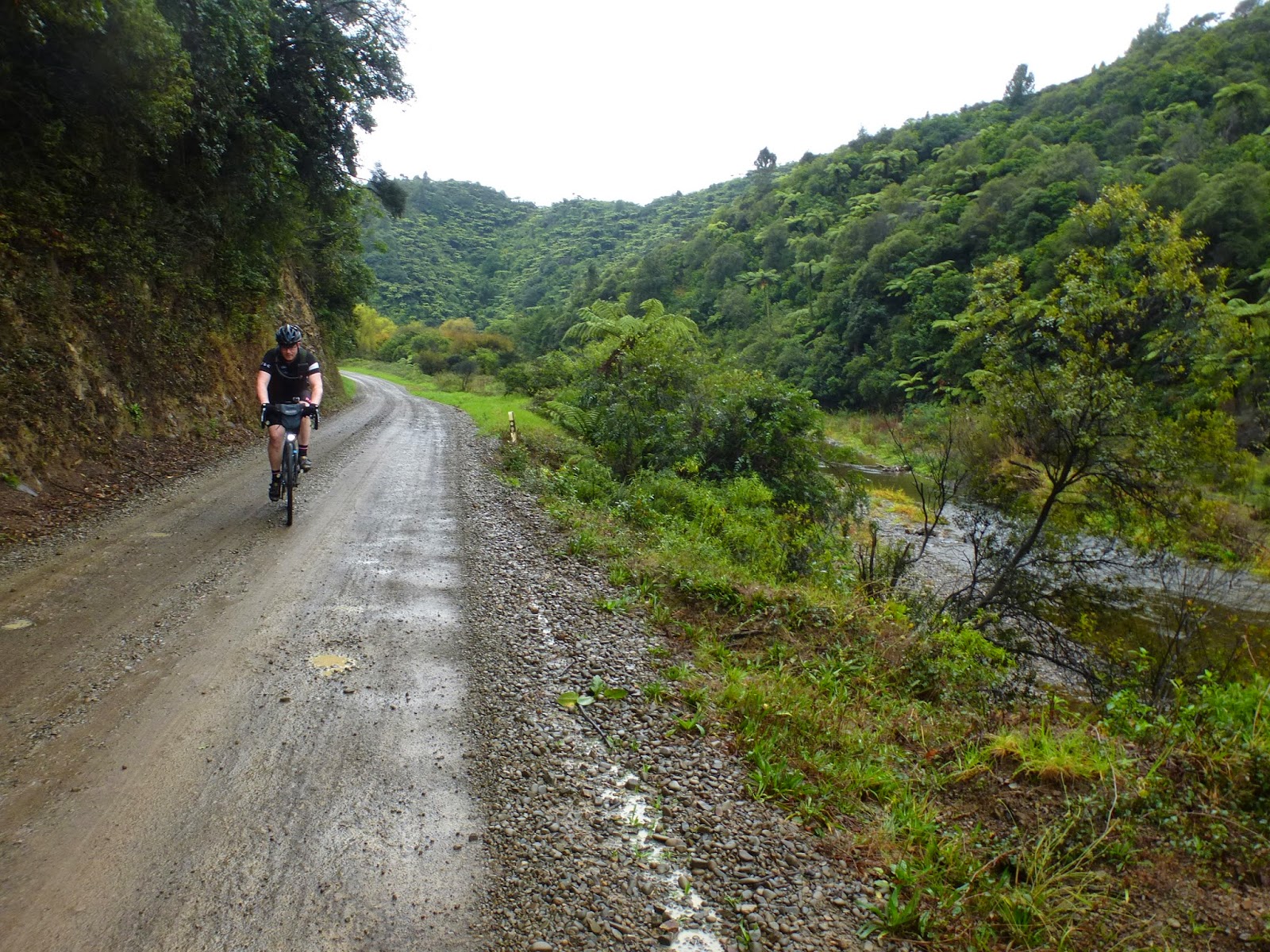 The river ran below...we climbed from being next to it to 2,066 feet above it. 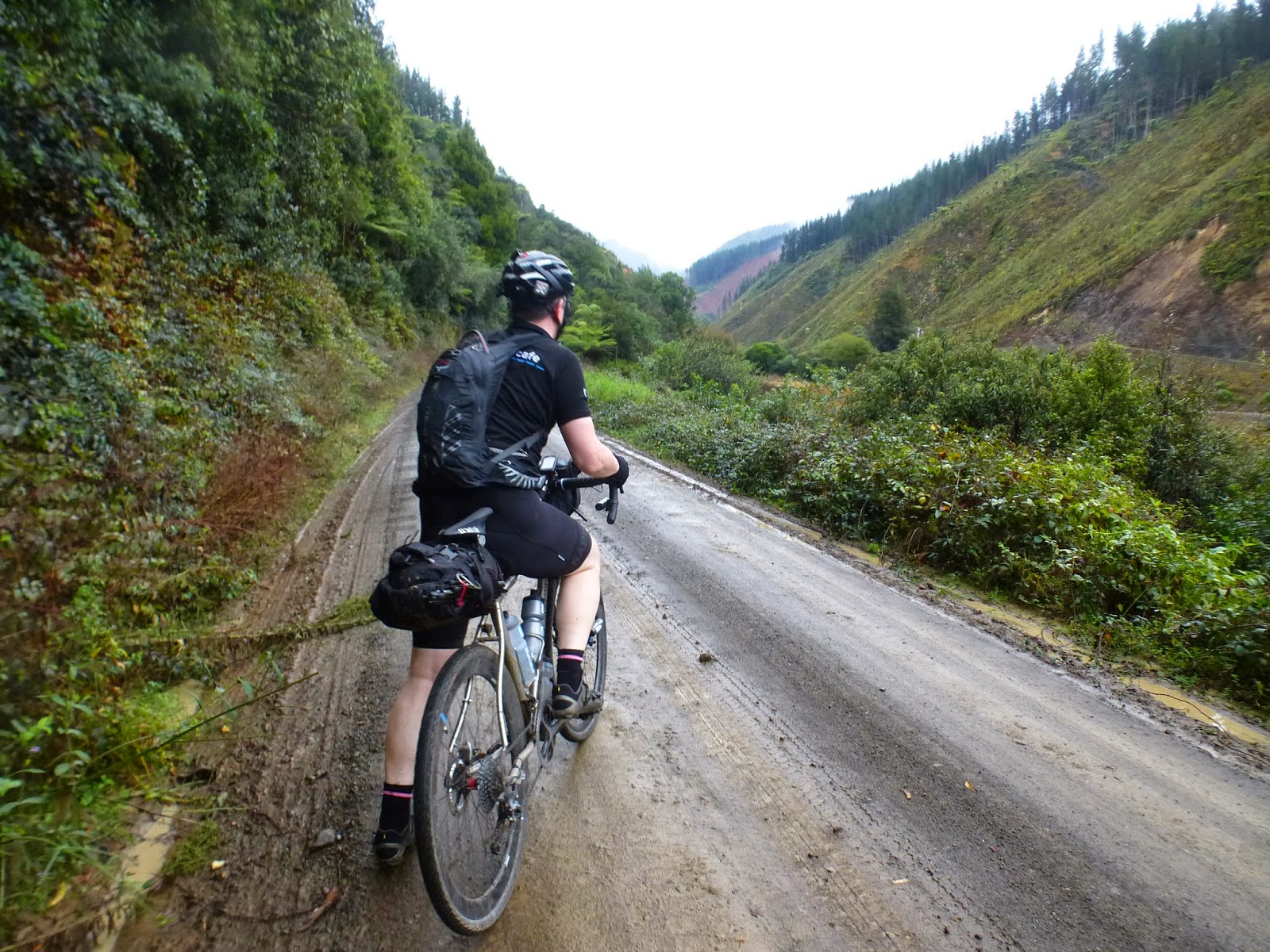 More amazing views... We kept stopping for photos, but not for long at any point. It was a 7 hr 15 minute ride (pedaling time) from beginning to end. 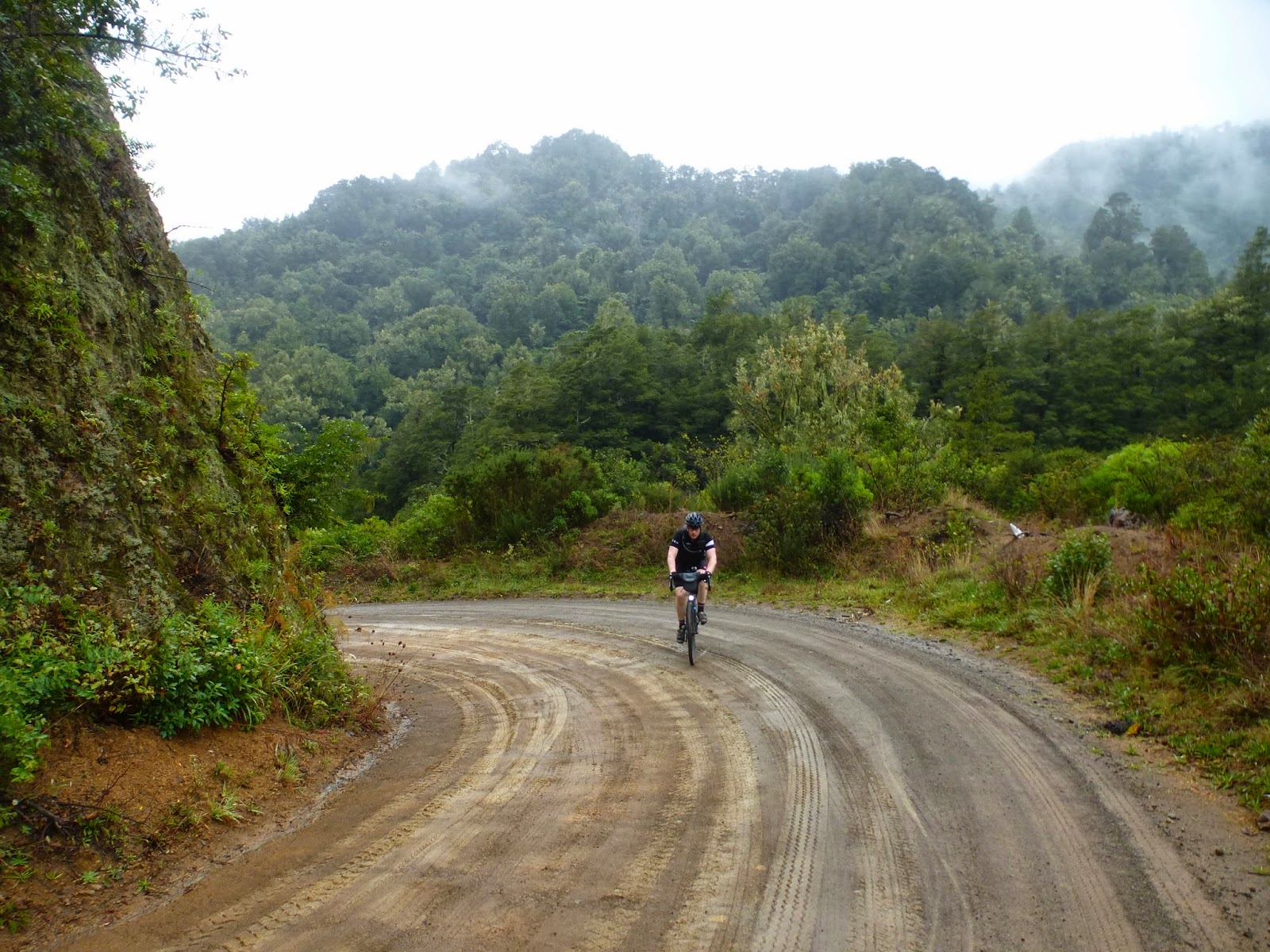 Up into the clouds! 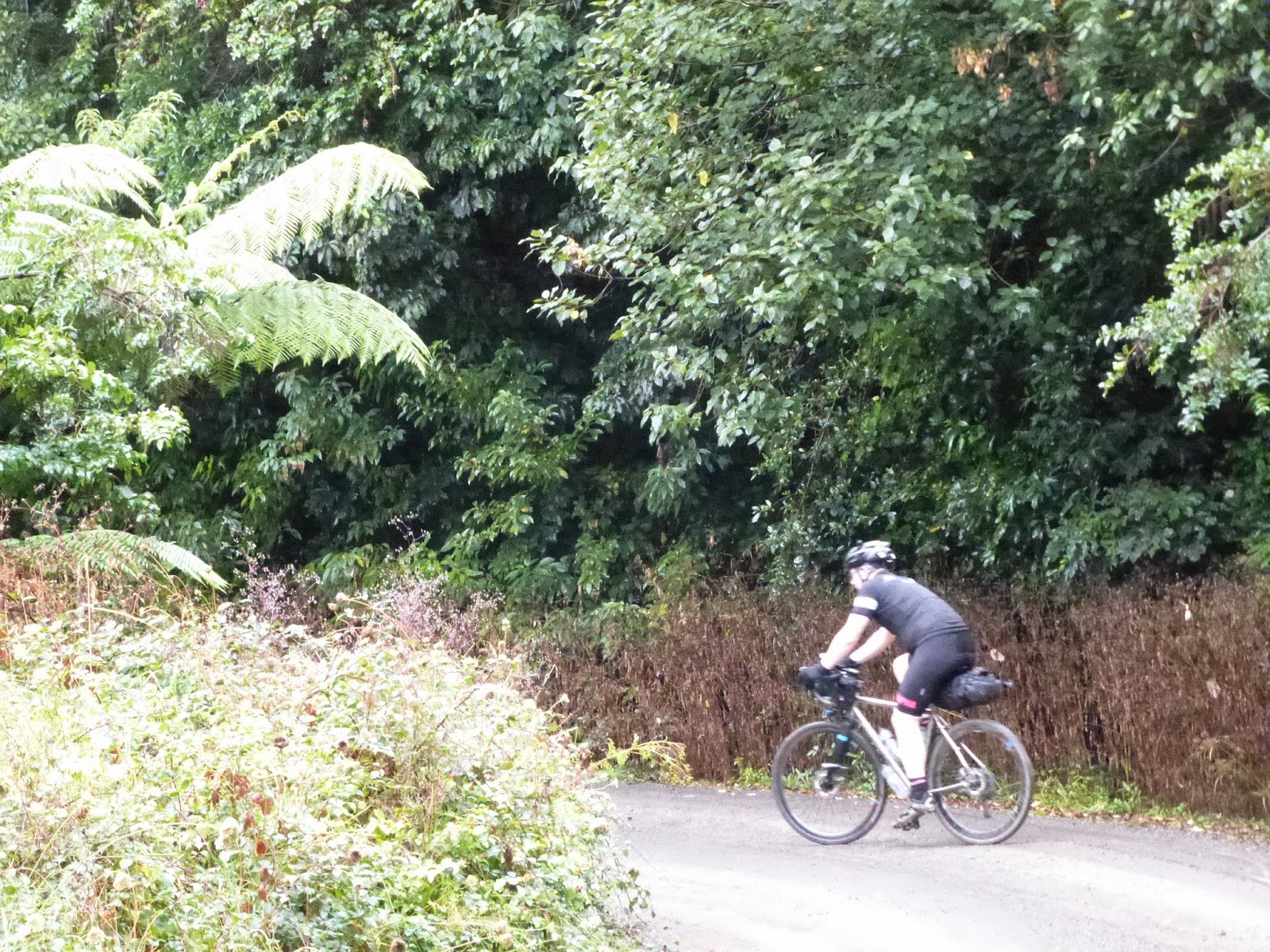 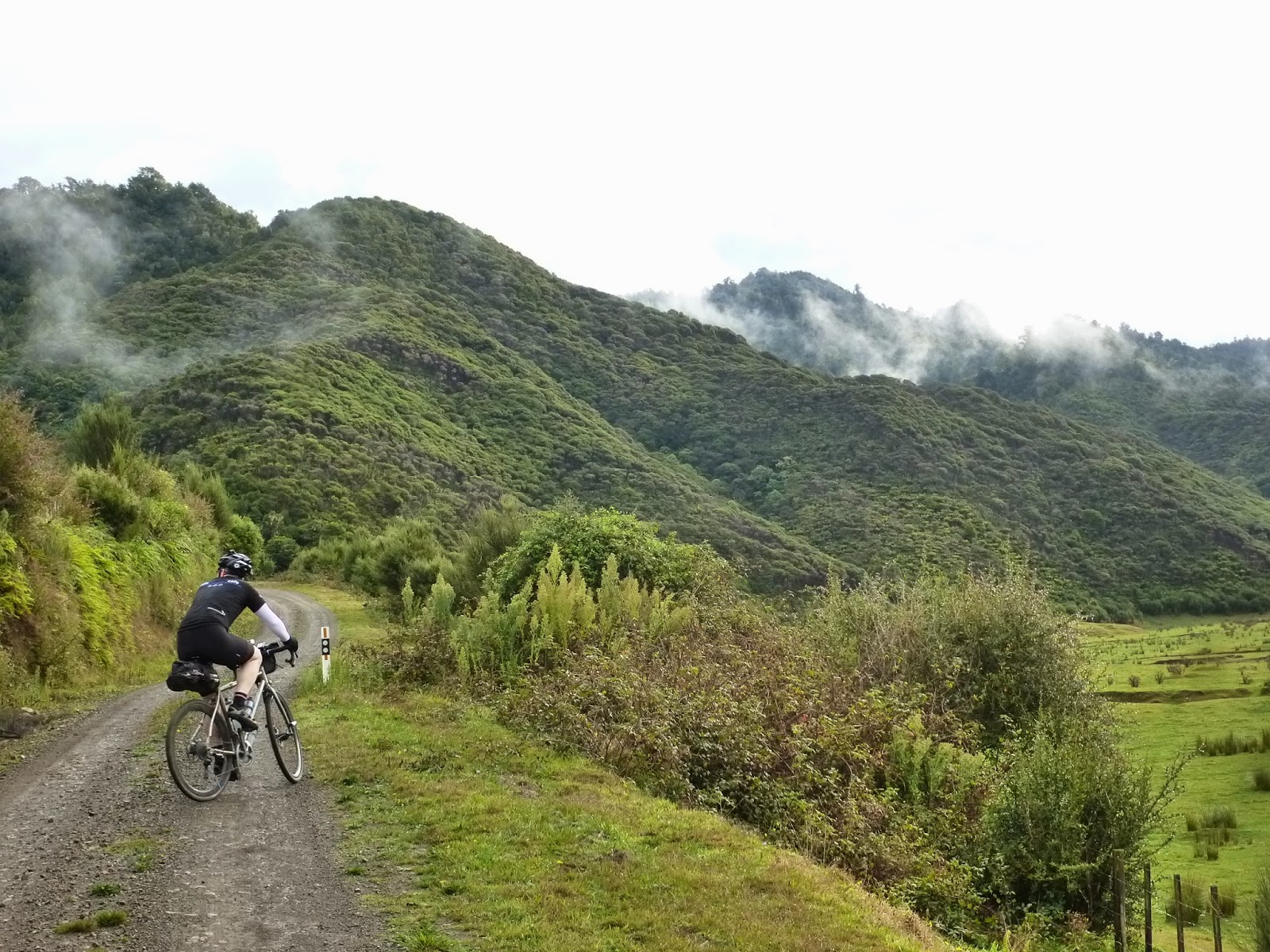 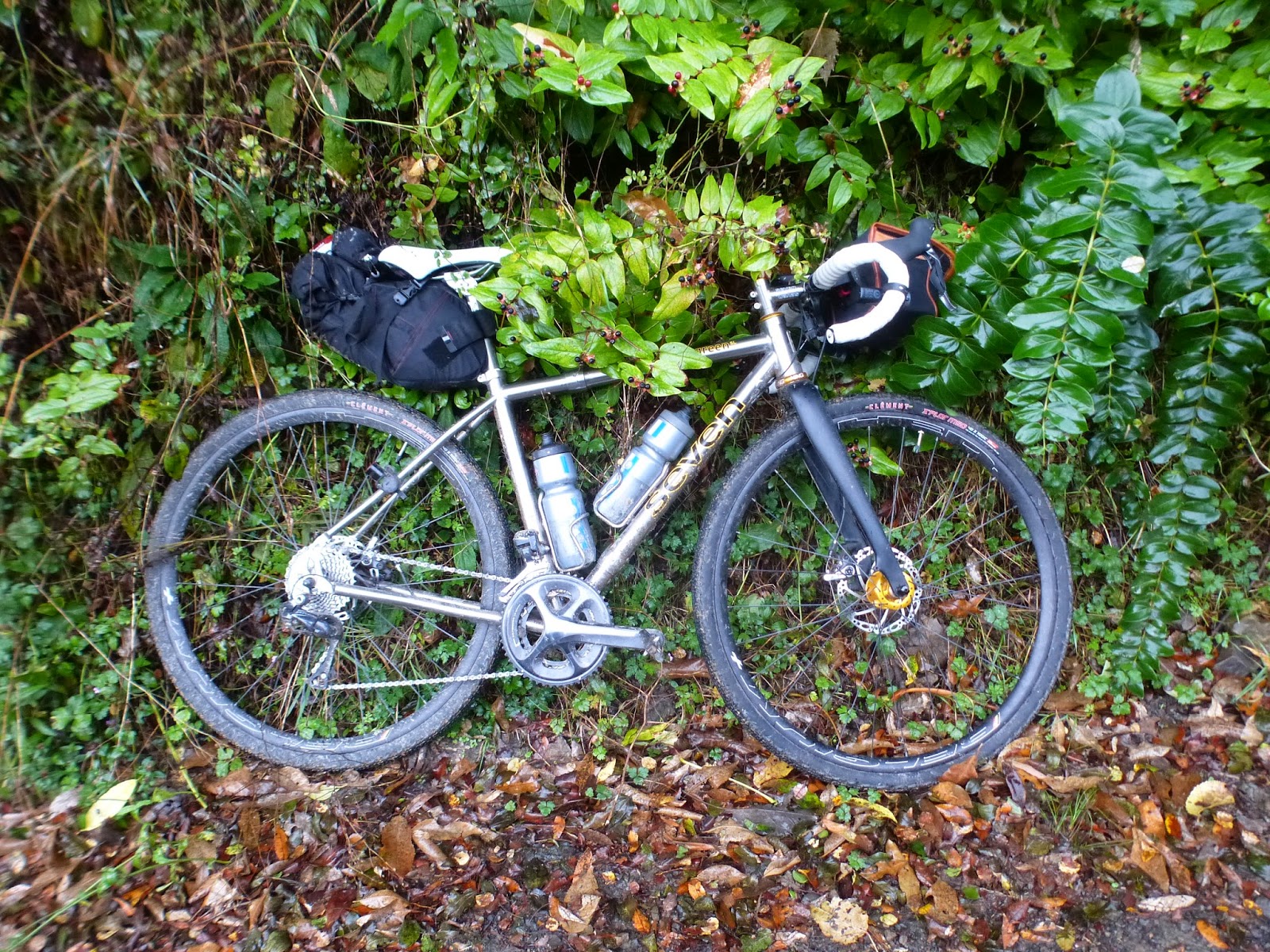 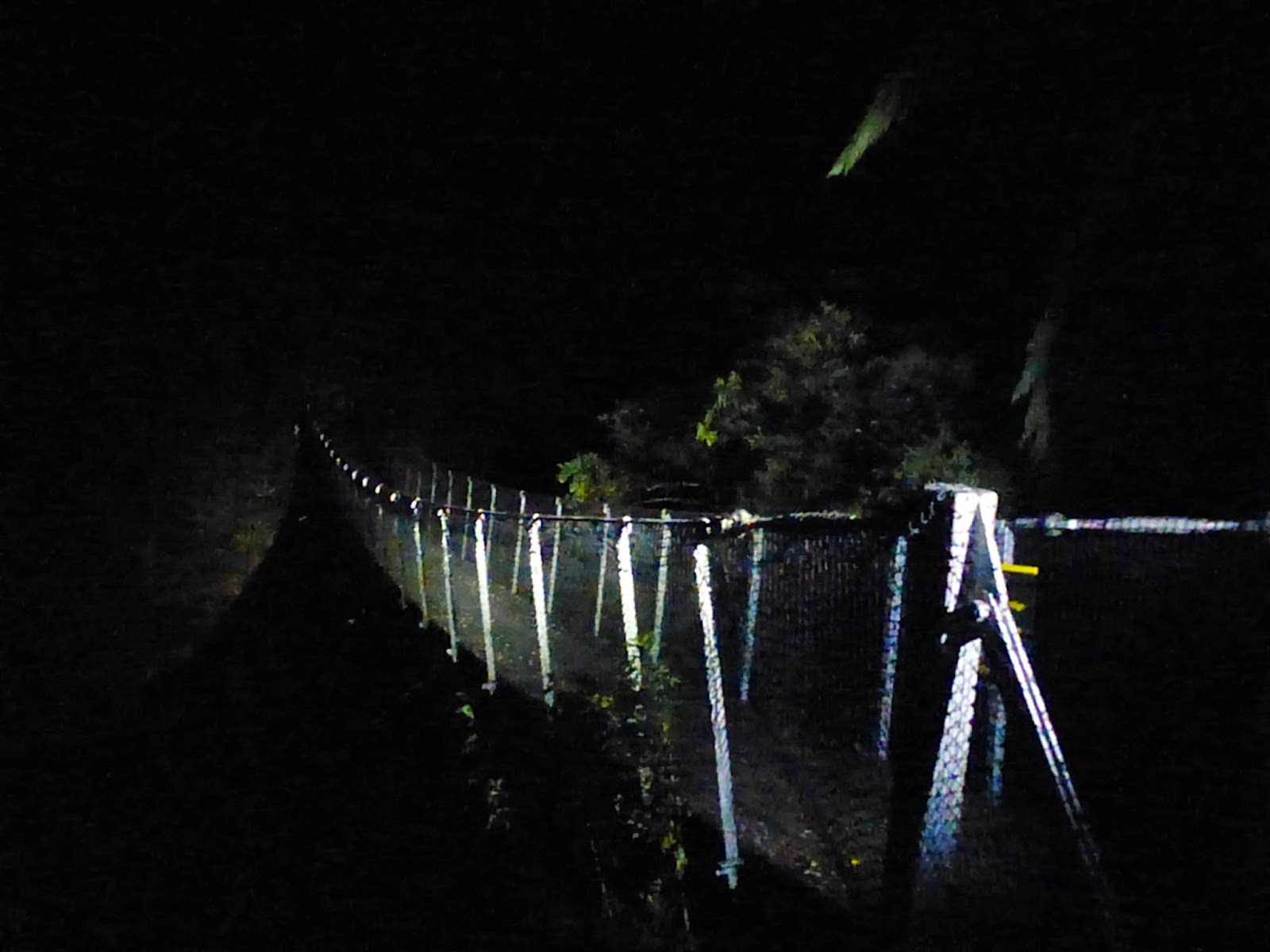 Then the dirt road turned into a single track mountain bike trail for the entire descent back down. (That's a very, very long way on single track--3 hours to be exact and most of that was spent grabbing the brakes.) Here's a swinging bridge over the river. Capacity: 5 people. At least it looked very strong so I wasn't worried. Day turns to night very quickly under the dense foliage, but we had plenty of lights. We finished up at 10pm. Towns shut down around 7pm so dinner had to be bought at a gas station at that late hour.

We have some great video from this ride that we'll get up at some point. Thanks again to those who've emailed/commented...we're glad you're enjoying the photos and stories!
Posted by Unknown at 5:03 PM