Yesterday could be called a recovery day of sorts. We took our time and didn't rush to get out. My legs really felt the ride of the previous day so the idea of getting up and out early to be on a bike didn't sound appealing. There were things we needed to do in town such as go to the iSite place (tourist info location) for mountain bike park passes, get some groceries (of greatest importance: sunblock), and drop by the local bike shop for some CO2 cartridges.

Even though we'd eaten a large breakfast, lunch time found us hungry again. Having a cappuccino and lunch on an outside table in the heat of the sun felt like vacation. Unrushed time like this? Almost never happens. Easier to appreciate these moments when they are so rare. I didn't get shots from the little town of Taupo, but we will likely be back there.

It was late by the time we got out to ride - probably 5pm. We have been riding with lights, otherwise, the days would be too short and it would be too stressful worrying about beating the sun back. Sunset is at 6pm.

This ride was from Taupo up to Huka Falls and back, following along the Waikato River. Total ride time ~2.5 hours, ~28 miles. 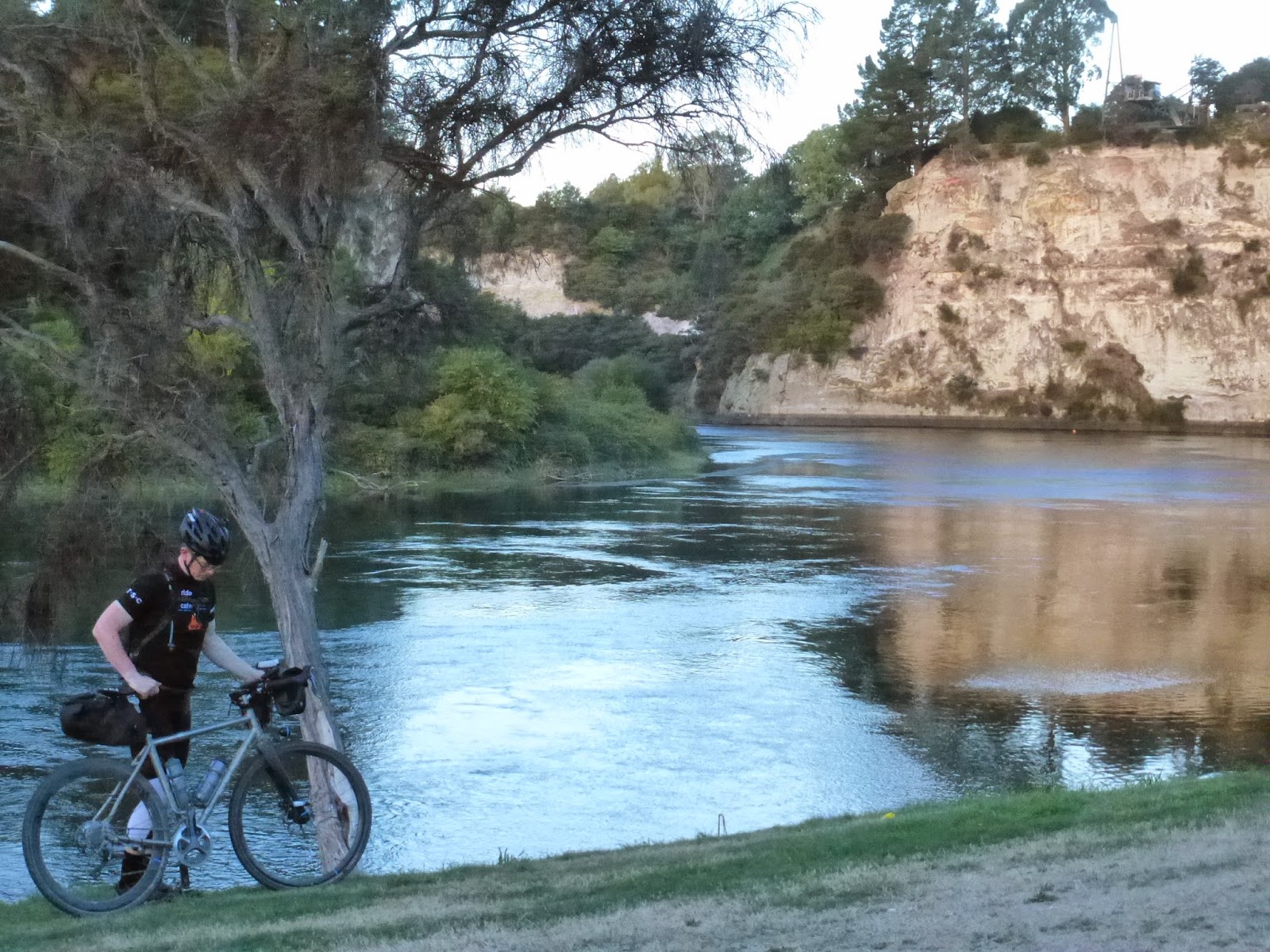 Traveling through a random parking lot found us here - in a beautiful scene most unexpected.

From here, the riding got good, really, really good. It was the best single-track swoopy roller-coaster like terrain I've ever ridden. Most of the trail was covered by tall trees and dense folliage. Some of the trail was getting overgrown by tall grasses such that it wasn't obvious we were riding on the trail. If it hadn't been for Rob mapping all of this ride in advance on the GPS, we would have gotten very lost. Instead, we flew up, over, around, and down into an area that felt like a canyon.

We have some video of the trails, but haven't edited it yet. When we get it up, we'll share it. 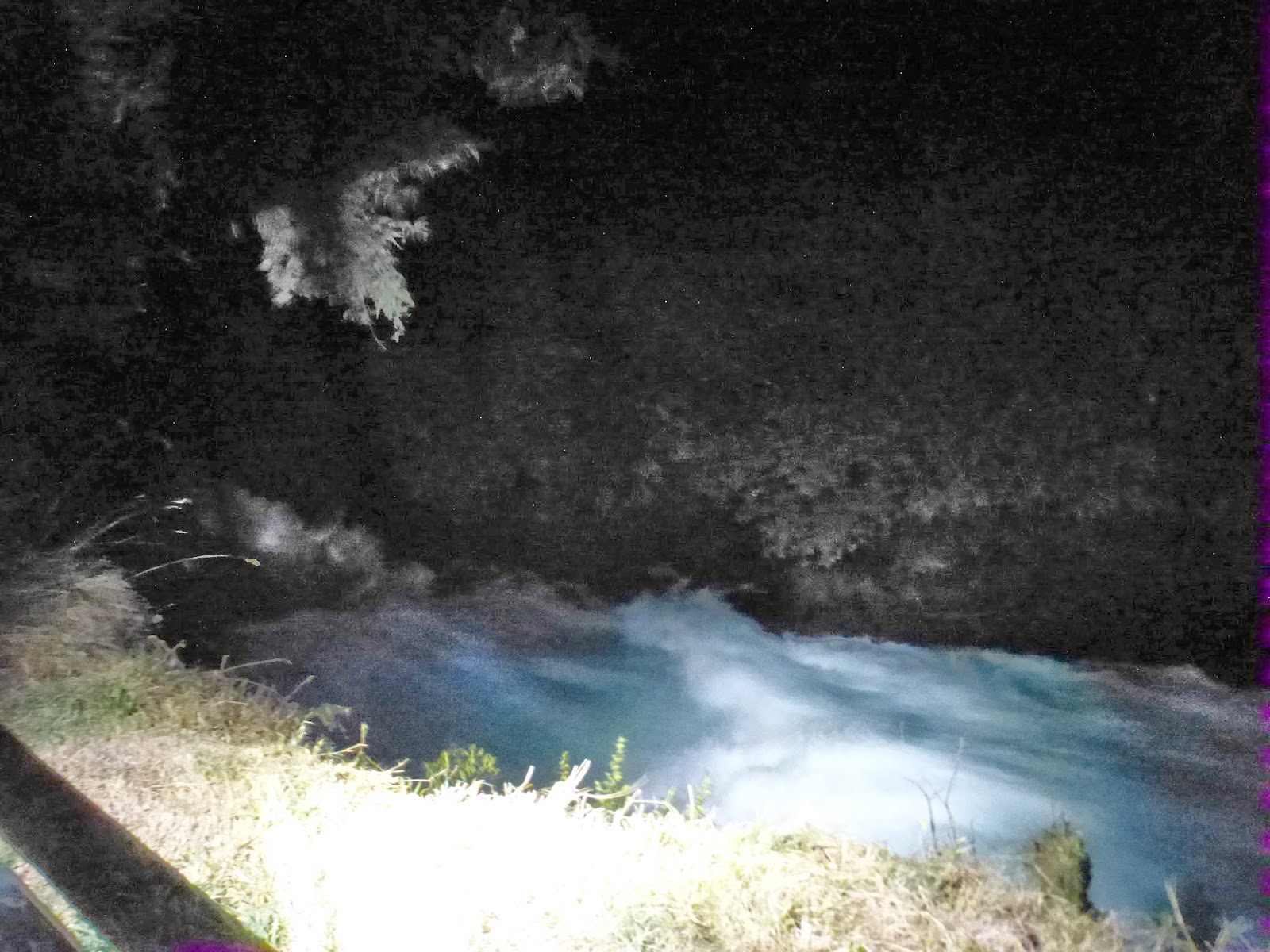 Well after dark, we arrived at Huka Falls. They were loud, and when we finally could see the falls, it all made sense why...222,000 liters of water rush past every second. I've never seen such powerful falls raging in a canyon like this. 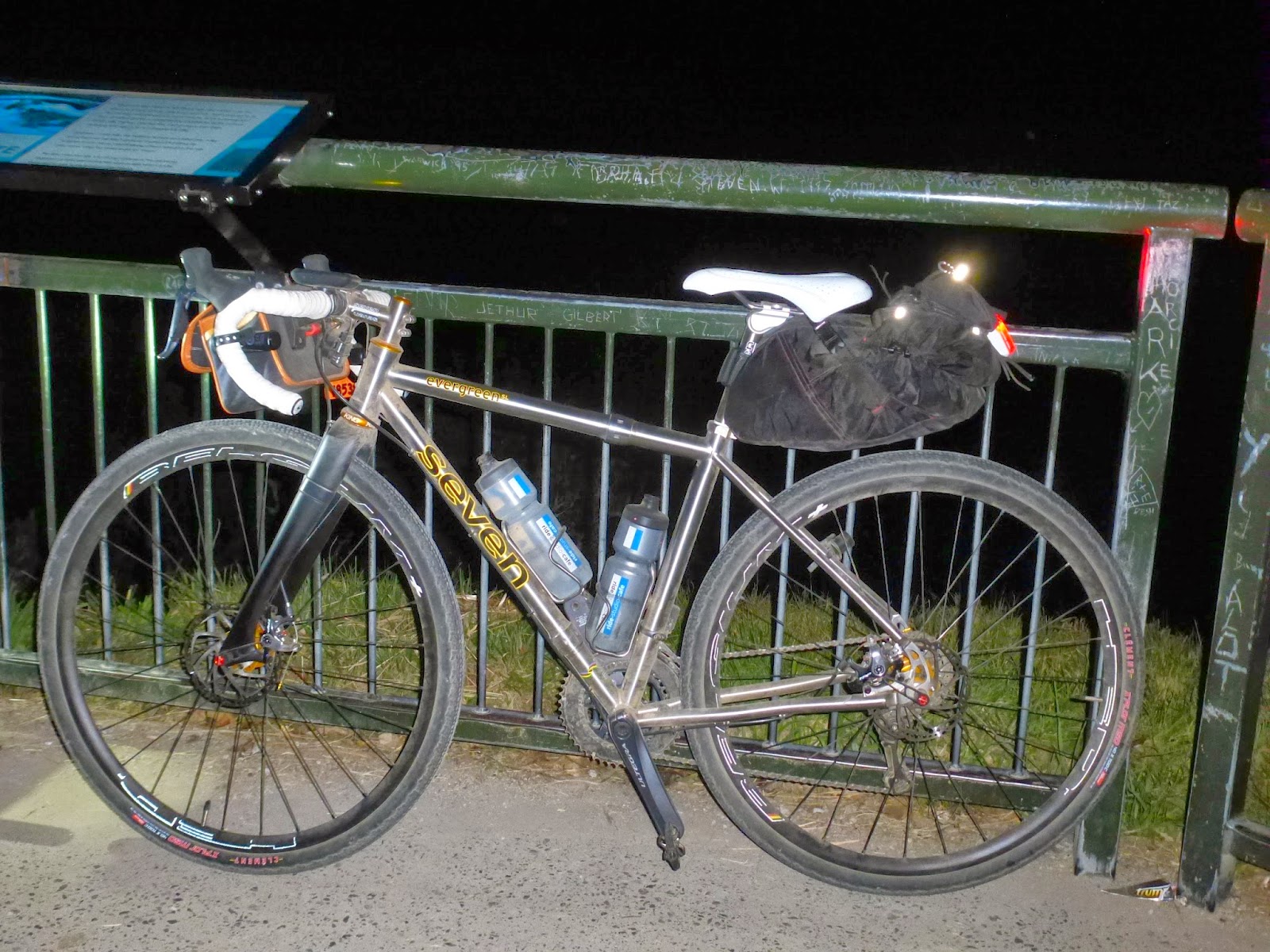 Here's the bike checking out the falls below. We had to cross a bridge that overlooked the water. It's so calm at night here with no one in sight on any part of these trails. With the loud water and darkness, though, I wouldn't have enjoyed being here alone. Doing this with someone who is as up for the adventure as I is such a great experience - and neither of us would be here without the other. All that being said, I never would have dreamed up such a ride on my own. My imagination and any research I did about NZ prior to this trip doesn't come close to what reality has offered thus far.

From here, we jumped on the road and flew home easily. The paved roads here are perfectly smooth.

Dinner was at the hotel where we were served by an American - I believe she's the first American we've encountered on the trip.
Posted by Unknown at 9:56 AM